Stencils, prints, drawings and engravings in rock made by Aboriginal people. Find out how to spot and protect rock art. 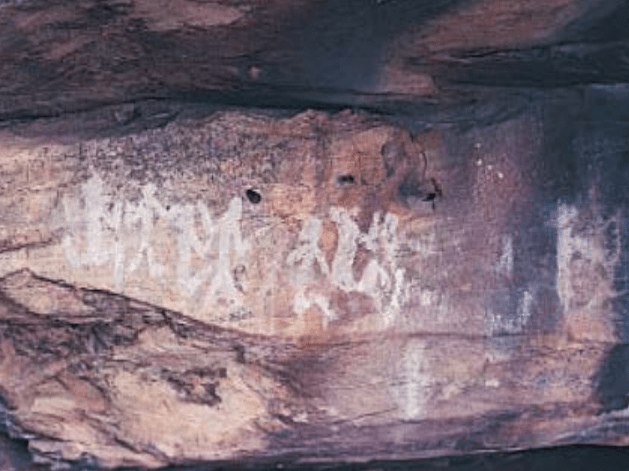 What is Aboriginal rock art?

Aboriginal people created artworks on rock surfaces. These include stencils, prints and drawings in rock shelters,and engravings in limestone caves.

Rock shelter paintings are usually of small stick figures, other simple forms such as kangaroo and emu tracks, and sets of stripes or bars. A few hand prints and hand stencils occur in Gariwerd (the Grampians).

Where is it found?

Aboriginal people painted in shallow rock shelters that are large enough to protect a small number of people from wind and rain.

Such shelters are found in Gariwerd and north eastern Victoria, usually in small clusters on the lower slopes of the ranges.

Engraving sites are more scattered, although they all occur in limestone caves.

Finger lines occur in areas of near or total darkness, while scratched motifs tend to be closer to cave entrances. 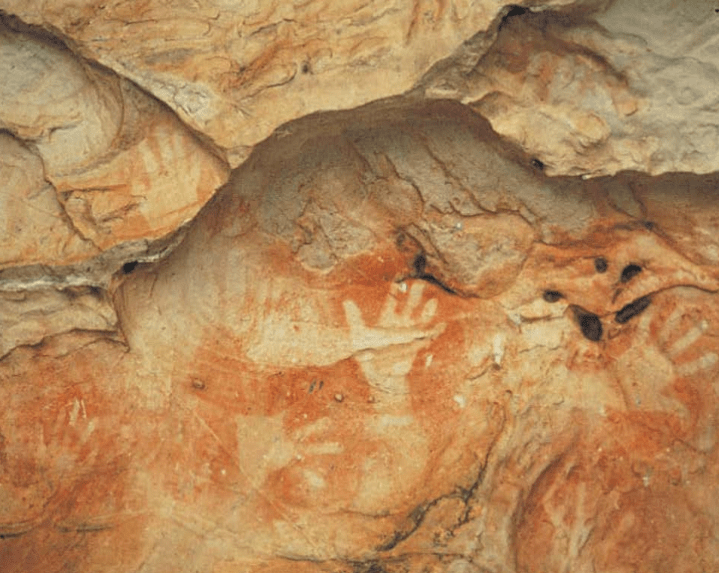 We do not fully know why Aboriginal people produced rock art. Possible reasons include painting or engraving to:

Only one painting has a recorded Aboriginal interpretation – the figure of Bunjil, at Bunjil’s Shelter near Stawell.

Bunjil was the main Dreaming Being of south eastern Australia. He produced many of the natural features of the landscape, and gave the various tribes their particular country. He also provided the laws, customs and rites with which to organise Aboriginal society.

Bunjil was important in boys’ initiation into manhood, and he was also the guardian of the secret lore. At the end of his time on earth, he rose into the sky where he is represented by a star.

The Bunjil painting has exceptional significance for the present Aboriginal people of western Victoria. Aboriginal people collected pigments for painting. The artists made red, purple and yellow pigments from ochre clays (which are rich in iron), and white pigment from kaolin clay.

They worked in the rock shelter, grinding up the ochre (usually with a stone on a grindstone slab) and adding water. They applied the paint to the rock wall with a finger, or with a brush made of bark or feathers.

A shadow image was left on the wall when the hand was removed. Drawings were made with a small lump of red ochre or charcoal used much like a crayon.

Engravings were cuts into the rock surface with a harder, blade-like rock, probably a specially made stone tool. Finger impressions could be made only in the soft clay that builds up on the walls of limestone caves.

The Aboriginal artists drew their fingers across the wall surface, leaving a characteristic trail of three or four parallel grooves.

What are the subjects in Aboriginal rock art?

Rock art varies across regions, but the style is broadly consistent across most of south east Australia.

A simple vertical bar is the most common motif in Victorian rock art. Other common forms are human figures, lines, dots and hands. Pictures of animals are rare.

The human figures are mostly stick figures, either with an elongated body or wearing a simple head dress. The hands are generally stencils or prints, although a few are painted.

The two styles occur across the southern half of Australia in most areas where there are suitable caves.

How old is Aboriginal rock art?

No Victorian rock art has been firmly dated. Circumstantial evidence suggests that the finger markings belong to a tradition that began during the last Ice Age, more than 10,000 years ago.

The scratched engravings maybe more recent, but they are still probably at least 5000 years old. The age of the earliest paintings is unknown.

But white paintings often overlay red paintings, so the white ones must be more recent.

A red painting of what could be a thylacine (or Tasmanian tiger) at Mount Pilot in north east Victoria may be at least 3000 years old, because thylacines are thought to have been extinct on mainland Australia since that time.

Why is Aboriginal rock art important?

Rock art is one of the few traces of pre-contact Aboriginal society that does not directly relate to the society’s economic needs.

It gives us a valuable glimpse of the aesthetics, psychology and spirituality of the artists and their cultures.

Rock art places are particularly significant as an important link for Aboriginal people today with their culture and their past.

Is Aboriginal rock art under threat?

Rock paintings are particularly prone to natural erosion because they are found on exposed surfaces. Many art motifs may be destroyed unless they are protected.

Most are located in remote areas, so they are difficult to monitor and protect from weathering and vandalism. First Peoples - State Relations records the location, dimensions and condition of Aboriginal rock art places.

The aim is to have a permanent written and photographic record of this important part of the heritage of all Australians.

The law protects all Aboriginal cultural places and artefacts in Victoria. It is illegal to disturb or destroy an Aboriginal place.

Artefacts should not be removed from site.

What if you find an Aboriginal rock art place?

Do not disturb the place or remove any material. Check whether the art has the typical characteristics of Aboriginal rock art.

If it does, record its location, write a brief description of its condition, and sketch or photograph the artwork. Note whether it is under threat of disturbance.