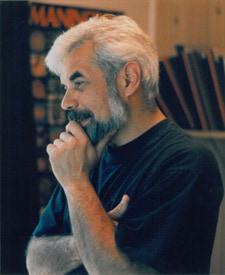 William 'Lin' Onus was a trailblazer who put urban Indigenous art on the map. First and foremost an activist, it was through his paintings and sculptures that he drew attention to the stark realities of life in Aboriginal Australia, while challenging audiences to take action.

Born in Melbourne in 1948, Lin was the only child of Bill and Mary Onus. His father was a Yorta Yorta man, a well-known activist and successful businessman. His mother was a politically engaged Scottish woman. The family lived in the Melbourne suburb of Deepdene. Although unjustly expelled from high school, Lin returned to study later in life.

Lin's father owned a shop and factory in Belgrave, where he produced traditional Aboriginal artefacts for the tourist market. As a boy, Lin would collect bent wood for his father to make boomerangs and then help paint them. While visits to Cummeragunja and Barmah Forest gave him a strong sense of his Aboriginal culture, Lin was also exposed to fine art in the European tradition by his maternal grandparents.

After his father passed away in 1968, Lin sought to keep the business going, but was forced to take on other jobs. He applied for a role with the Country Fire Authority and impressed in examinations. However the chairman at the time — a White Australia Party member — rejected Lin's application after learning he was the son of an Aboriginal man. Nevertheless, Lin served as a CFA volunteer all his life and received a National Medal in 1985 for his community work. He trained as a car mechanic and panel beater, later utilising some of the skills in the creation of his art.

Lin inherited the revolutionary spirit of his father and both parents influenced the development of his strong social conscience. He became a well-known activist alongside his cousin, Bruce McGuiness, and friend, Gary Foley. At age 22, Lin met his future wife, Jo Kloster. They had one son.

In 1971, in the wake of the Victorian Government's Aboriginal Lands Act 1970 – which returned land to Aboriginal communities at Framlingham and Lake Tyers – Lin staged a protest at Sherbrooke Forest in the Dandenong Ranges. He camped in the forest for three months, constructing a hut and vowing to live there until the Aboriginal claim to the land was recognised. Although the protest was cut short, it succeeded in highlighting the issue of land rights to a wider audience. Soon after, Lin began painting seriously. It signalled a move away from conventional methods of protest, as he realised he could communicate his messages more effectively through his art.

As a self-taught painter, Lin's first solo exhibition was held at the Aborigines Advancement League in 1975. Opened by Sir Doug Nicholls, it was a resounding success. Lin subsequently began to donate paintings to be raffled off in aid of the Aboriginal Funeral Fund, which covered burial costs for families who could not afford them.

Earning widespread acclaim for his hyper-realistic landscapes, Lin went on to have 17 solo shows in Australia over a 21-year period. His work has been exhibited as far afield as New York, Madrid and Seoul, and he was artist-in-residence at the Fujin Kaikan Centre in Japan. While initially known for his paintings, sculpture later became the medium in which he created some of his more overtly political works. In 1986, Lin was appointed to the Aboriginal Arts Committee, a major committee of the Australian Council. He later served as Chairman.

Lin's art often combined Western techniques with traditional Aboriginal colours and patterns. This distinctive style was born of his close relationship with Jack Wunuwun, a Yulungu Elder and artist from the Garmedi outstation in Central Arnhem Land. On their first meeting, Lin was given a traditional skin name and became Jack's son. Over subsequent visits, he was taught about the culture and art of the Yulungu people. Eventually, Lin was granted permission to use certain aspects of their imagery in his work, including a unique crosshatching technique.

Copyright protection for Indigenous artists was an issue to which Lin dedicated much of his later life. He co-founded the Aboriginal Arts Management Association – today known as the National Indigenous Arts Advocacy Association. He was also a founding member of the copyright collecting agency, Viscopy.

Lin worked as artistic designer on the film Black River, which won a Grand Prix Opera Screen Prize in Paris in 1993. He was made a Member of the Order of Australia the same year. In 1994, Lin was appointed to the Victorian Council of the Arts and received the National Indigenous Heritage Art Award and People's Choice Award. His work has been recognised with several other awards.

Tragically, Lin passed in 1996, at the age of 47. The loss was felt keenly around the country. As the new millennium dawned, a major retrospective, Urban Dingo: The life and art of Lin Onus, opened in Sydney, before showing in Melbourne and Brisbane. Other exhibitions have followed, including a touring show through regional Victoria in 2009. Today, his original works can found in galleries around the country and are highly sought after on the contemporary art market.

Lin was a groundbreaking artist, who used his talent to advance the cause of Indigenous Australians. His gift lay in his ability to create art that, while accessible to the mainstream, was uncompromising in its message.