A trailblazer who won hearts around the nation 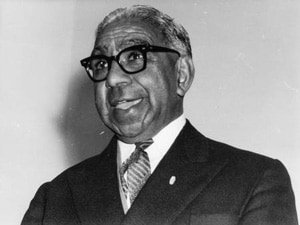 The achievements of Sir Douglas Nicholls are many and varied, taking in the fields of sport, politics and social justice. He broke new ground — as the first Indigenous Australian to receive a knighthood in 1972, and the first to be appointed to vice-regal office, when he became Governor of South Australia in 1976.

A multitalented athlete in his youth, Sir Doug's sporting prowess was the young Yorta Yorta man's ticket out of the Cummeragunja Mission on the New South Wales bank of the Murray, where he was born in 1906. In 1927, he moved to Melbourne, hoping to play football. Initially recruited by Carlton, Sir Doug chose to leave after overhearing derogatory remarks from his teammates. It was Carlton's loss, as he went on to star for Northcote, drawing huge crowds and helping his team win the 1929 premiership. At the same time, he continued to excel as an athlete and boxer.

In 1932, Sir Doug moved to play for the Fitzroy Football Club, where he remained until his retirement from the game. The move was significant as it involved him with the small but ever-growing Aboriginal community that called Fitzroy home. It was from here that one of the most important Aboriginal rights movements would arise, with Sir Doug as one the main driving forces behind it.

Joining the church was a pivotal moment for Sir Doug – simply Doug to those he met. He became a pastor after his mother's death in 1935, and led church services from Fitzroy's Gore Street Mission. The compassion he displayed while tackling disadvantage shaped his reputation as a father figure to the community. He was chosen to give the first Aboriginal Day of Mourning speech in 1938, during which he expressed that ""Aboriginal people are the skeleton in the cupboard of Australia's national life...outcasts in our own land."" It was a powerful line that, for the first time, made many sit up and take notice.

Sir Doug enlisted during the Second World War but was recalled from service at special request in 1942, in order to continue addressing the social problems - such as alcohol abuse and crime - that plagued his community. For the next decade, the frontline for Sir Doug was the streets of Fitzroy, as he strove to improve lives and assist those who'd slipped through society's cracks. In 1942, he married his wife Gladys — a respected community leader in her own right. The two shared a life for 39 years.

As a young man, Sir Doug had been a founding member of William Cooper's Australian Aborigine's League, created in 1936. In 1957, he helped found the Aboriginal Advancement League (AAL), which absorbed its predecessor. Sir Doug was appointed the organisation's first field officer and also edited its journal. The AAL went on to take a leading role in lobbying government on Indigenous issues, including during the 1967 referendum that saw Indigenous people counted in the national census — a symbolic win in an ongoing battle.

Sir Doug's role with the AAL raised his profile to a national level. The success of the organisation gave rise to the national Federal Council for the Advancement of Aborigines and Torres Strait Islanders (FCAATSI), with Sir Doug as the Victorian Secretary. At the same time, he continued to serve his community by setting up hostels and helping find employment for young people newly arrived in Melbourne.

The League benefited from Sir Doug's involvement for many years, as did many other advocacy organisations. In 1962, Sir Doug was awarded an MBE and named Victoria's Father of the Year. This was followed by an OBE in 1968 and then the Knighthood in 1972. He was appointed the inaugural chairman of the National Aboriginal Sports Foundation and enjoyed audiences with the Queen and the Pope. When poor heath forced him to retire in 1977 — a year after he had been appointed Governor of Australia — he did so a figure much loved and admired around the country.

For all the recognition and honours, it was for his modesty that Sir Doug was equally famed. He never shied away from exposing the realities of prejudice and inequality. By the end of his life in 1988, Sir Doug was credited with helping to return a sense of pride and hope to people who had lost both. That he enacted real change for the better is unquestionable and a statue in Parliament Gardens in Melbourne attests to his status as one of Australia's truly influential figures of the 20th century.