A respected mentor and cultural ambassador. 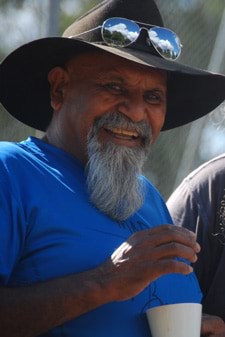 Robert Cooper - or Uncle Wally as he is known - was a valued member of the community whose contribution to reconciliation in Victoria has been significant. He was a positive influence in the lives of many young Aboriginal people, while the warmth of his personality endeared him to all he met.

The Yorta Yorta and Bangerang Elder was born in Mooroopna in 1949. His father, Robert, worked as a shearer and wood cutter. His mother, Kathleen, was a descendant of the Mutthi Mutthi people of south-western New South Wales. Wally was the eldest in a family of 18 children.

The family lived on the outskirts of Shepparton, on the banks of the Goulburn River, at a rubbish tip known as Daish's Paddock. The settlement was a makeshift one, with shelters constructed from materials such as hessian bags. Wally would walk several miles each day to attend primary school in Mooroopna.

When he was 10 years old, Wally and several of his siblings were taken from their parents by government authorities. Wally was placed with a non-Aboriginal family in Melbourne. Rather than accept his fate, the young boy ran away within a year and embarked on an epic six month journey to reach his grandfather in Balranald, New South Wales.

His travels proved perilous at times. In Swan Hill, he narrowly evaded police by clinging to debris and floating almost 40 kilometres downstream along the Murray River. On another occasion he was shot at while travelling through the bush after nightfall. Wally ultimately made it to his grandfather. However, his fear of being removed again meant he did not see his parents until he was 22 years of age.

When he was 18 years old, Wally was drafted to the Australian Army. He went on to complete a tour of Vietnam. Upon his return to civilian life, Wally held down various labouring jobs, before moving into roles at the Aborigines Advancement League and then as a liaison officer at the Victorian Ministry of Aboriginal Affairs. Twice married, he is a father of five.

In 1985, Wally became a founding member of the Koorie Heritage Trust. He served on the Board for many years and worked as a Cultural Officer and curator during the 1990s. Wally often represented the organisation publicly. He ran a stand at the Royal Melbourne Show for 15 years and was the subject of several educational videos. He was made a life member of the Trust in 2006 and had a room named after him at the Cultural Centre in Melbourne.

Over the years, Wally was an important mentor to young Aboriginal people in Victoria, including some of today's emerging leaders, who credit their achievements to his wisdom and guidance. Beloved as a father figure and trusted confidante, he countered disaffection by encouraging pride in Aboriginal identity and was an enthusiastic believer in the benefits of education. Members of the Stolen Generations have reconnected with their heritage and found a sense of belonging with his assistance. Available to anyone who needed him, Wally gladly organised a therapeutic fishing trip or simply lent an ear as required.

Skilled in traditional techniques such as boomerang making, emu egg carving and spear throwing - to name but a few - Wally was a passionate cultural ambassador who proudly shared his traditional knowledge with the wider community. Through his work with the Catholic Education Office, he helped teach hundreds of school children about Aboriginal culture, including the stories of the Dreamtime. He enriched the experience of participants at countless workshops and events, including during NAIDOC Week celebrations.

A close working relationship with the Victoria Police and Corrections Victoria saw Wally called upon by both to mediate during crisis situations. He was acknowledged as having had a role in curbing Aboriginal deaths in custody. The Victorian Police also presented him with a special award in recognition of his contribution to the Aboriginal Liaison Officer training program.

With his firm grasp of the issues affecting his community, Wally's advice was often sought by local council and peak bodies. He helped broker successful working relationships between local farmers and the Aboriginal community, through his involvement with the Victorian Farmers Federation and the Warby Range Landcare Group. More generally, his willingness to lend a hand led him to volunteer his time for a diverse range of activities, from bushfire recovery to livestock management.

Wally worked on Indigenous interpretive sign projects for both the Rural City of Wangaratta and Parks Victoria; the latter required him to hand carve animal and spiritual symbols into granite stones that were placed throughout national and state parks to educate visitors.

He resided in Glenrowan, where he was a well known personality.

Uncle Wally is a man whose pride in his Aboriginal heritage and message of hope for the future has inspired and enlightened. His ability to connect with Aboriginal and non-Aboriginal people of all ages has helped build respect and understanding within the community, earning him a place in innumerable hearts.