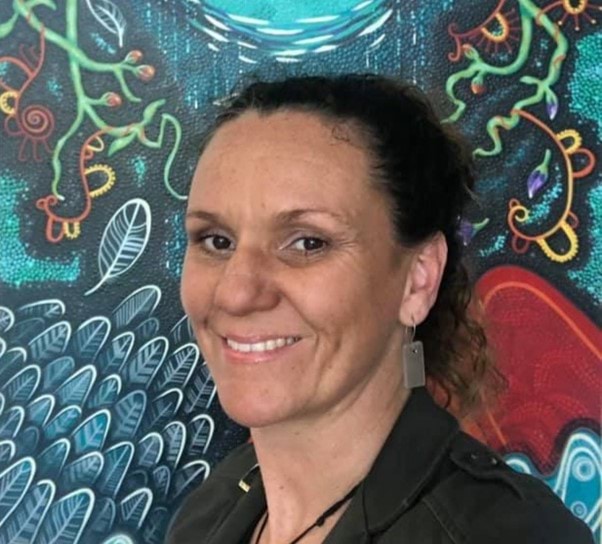 A powerful and generous changemaker.

Patrice Renee ‘Muthaymiles’ Mahoney was born in Canberra on 4 November 1975. She is a proud mother of five children and one granddaughter. Her connections to family and place reflect her multicultural connections from the Anaiwan Nation (NSW), Malta, France, Ireland and England. She grew up in Armidale (NSW) and then moved to Victoria—first to Lakes Entrance (Gunaikurnai Country), and then to the Bass Coast region (Bunurong Country), where she has lived for over 20 years.

Patrice is a powerful advocate for Aboriginal people and their cultures, and a talented, prolific artist who believes art and education are the basis of identity, self-determination and leadership. She holds a Graduate Diploma (Teaching), Bachelor of Arts (Media Art and Design), Advanced Diploma (Business Management) and is currently undertaking a Master of Fine Art at Monash University. She is profoundly influenced by a sense of space, place, the environment, visual art and culture. She takes great inspiration from the natural environment where she lives.

When Patrice was 21 years old and wanted to get away, she closed her eyes and put her finger on a map. It landed in the sea just off Lakes Entrance, so she moved there with her two children, a foster child and two dogs. Later, she met a man whose family lived in Wonthaggi, so they moved there in 1999 with three children in tow.

Patrice found Wonthaggi depressingly monocultural. She observed how Aboriginal people were invisible in the region, compared with her hometown. Patrice couldn’t see where she could fit in: “I’d grown up in Armidale, where there was a university, and the community was a melting pot. Wonthaggi felt like the Deep South!”. She was confronted by her perception that the Bass Coast community had minimal knowledge or understanding of the Aboriginal history of the area, and limited will to learn about—let alone celebrate—local Aboriginal communities.

When Patrice’s eldest son was severely bullied at a local primary school for the colour of his skin, she became even more determined to educate the community and, in turn, break down some negative stereotypes. She wanted to help her children not experience racism, and also didn’t want Aboriginal children to grow up with anger towards non-Aboriginal people as a consequence of being treated badly.

Convincing people that these issues mattered was a big challenge, especially in the context of the relatively low known number of Aboriginal people living on the Bass Coast. But Patrice persevered in the face of sometimes fierce resistance to achieve things most of us now take for granted, such as the displaying of the Aboriginal and Torres Strait Islander flags alongside the flag of Australia at the Bass Coast Shire Council (BCSC) offices.

Patrice persuaded the council to fly the Aboriginal flag during NAIDOC Week, and hundreds of local community members complained. She wrote to Councillors and the local newspaper inviting them to NAIDOC Week celebrations, but they declined to attend. Patrice continued to advocate for Bass Coast community leaders and institutions to introduce initiatives that would promote respect and celebration of Aboriginal cultures.

Patrice has also been a Director at Baluk Arts, a non-profit centre representing Aboriginal artists from southeast Victoria, and served on several boards and committees for Aboriginal health, education and justice organisations. In 2021, Patrice became the first Aboriginal board member of Phillip Island Nature Parks.

Patrice’s many voluntary advocacy roles have been complemented by other employed positions, such as a Parental and Community Engagement (PaCE) coordinator, which focussed on bridging the gap between Aboriginal people and educational institutions from kindergarten to higher learning. She particularly enjoys cultural sessions with school children, where she finds genuine rewards in sharing her professional skills and knowledge.

Patrice challenges current relationships between Aboriginal people and the broader community in her creative work. Her practice includes painting, weaving, assembling found objects, and printmaking. She creates her work by using a multidisciplinary approach that includes expanding her knowledge through traditional ways of learning, winanag-li (deep listening) from an Aboriginal perspective, and her multicultural heritage.

Patrice has completed many collaborative works including facilitating families and children to express culture visually through community publishing. This includes Fun in the Water (The Playground Mob led by Patrice Mahoney, Casey Aboriginal Gathering Place Playgroup), which was shortlisted for the 2018 Speech Pathology Australia Book of the Year Awards (Indigenous Children category). Other highlights include, Who is Your Mob?, for the Royal Children’s Hospital in Melbourne (with Kids Own Publishing) and publications in language for Dandenong Best Start and HIPPY Early Learning programs.

Patrice was awarded a Medal of the Order of Australia (OAM) in 2020 for service to the Indigenous community of Victoria. Patrice’s passions are driven by her desire for change and to achieve equality and equity, recognising that we do not all start from the same place and adjust to the imbalances. Above all, true respect and inclusion for Aboriginal people ensures that the same education and employment opportunities are available. Patrice is a powerful and generous changemaker.