A crusader against disadvantage 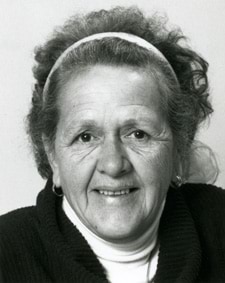 Nessie Skuta fought for Indigenous rights and a better deal for Aboriginal Victorians, particularly in Gippsland. Armed with drive and initiative, she achieved change for her community in health, education and housing.

Nessie was born in 1929. Her mother was a Pitjatjantjara woman from Central Australia, with connections to the Yuin people of south east New South Wales. Her father was non-Indigenous. She grew up around Sydney, including Kurnell in Botany Bay, the place where Captain Cook landed in 1770. Nessie attended a convent school in Redfern until she was 15 years of age and worked with her mother at a guest house in the area.

In 1945, Nessie started seeing a man from Poland named Wladyslaw Skuta. The 19 year-old — a resident at the guest house she worked at — had just migrated to Australia after the war. Nessie's mother, unable to pronounce the young man's name, would call him Jan. Nessie and Jan were together for over 40 years. The couple had seven children — five boys and two girls. Sadly, one of their sons died in infancy.

In the 1950s, the New South Wales government, under a policy of assimilation, could remove Aboriginal children of mixed descent from their families. Nessie and Jan went to desperate lengths to protect their children from the authorities. The family split up, and for nearly two decades Nessie and her children lived like fugitives, finding shelter where they could; a tent pitched under a bridge or a disused army barracks. Often the children were in hidden bushland, until finally, they were reunited with their father.

In the late 1960s, Nessie and Jan moved to Victoria, encouraged by the prospect of a better life there. They followed the seasonal harvest work. In an early display of direct action, Nessie mobilised a group of bean pickers to strike in protest over pay and conditions. The action resulted in an extra shilling for the workers: compensation for being made to do the job in unbearable heat.

In 1969, the family settled in the Gippsland town of Bairnsdale. Nessie became known to the residents of the Lake Tyers Aboriginal Reserve. The reserve had been the focus of a heated campaign, led by the Aborigines Advancement League and other Melbourne-based community organisations, over its proposed closure. This action led to the Aboriginal Land Act (1970), only the second piece of legislation in Australia that enabled land to be put into Aboriginal hands.

The reality Nessie saw at Lake Tyers was children dying from treatable illnesses. It was a situation indicative of the lack of health provision for Aboriginal communities at the time. Nessie was motivated to take action. She rallied a group of women into forming the East Gippsland Aboriginal Women's Group. They marched from Lake Tyers to Bairnsdale in protest over the conditions in which people there were living.

In 1972, the women set up a local health service, which was incorporated two years later as the East Gippsland Aboriginal Group. It grew to become one of the largest Aboriginal service providers outside of Melbourne. Known today as the Gippsland and East Gippsland Aboriginal Co-Operative, it employs over 100 staff and offers many medical, social and welfare services that benefit the local community. It also operates a cultural centre.

Between 1973 and 1977, Nessie was the Victorian member of the National Aboriginal Consultative Committee (NACC) set up by the Whitlam Government to advise on Indigenous policy. Nessie was known for her spirited exchanges with the then Minister for Aboriginal Affairs.

In 1977, when the NACC was superseded by the National Aboriginal Conference, Nessie was elected to represent Victoria in Canberra. In 1981, she successfully fought for the establishment of a taskforce within the Office of the Status of Women, to address the needs of Aboriginal and Torres Strait Islander women. She was also a member of a sub committee tasked with negotiating a treaty — 'Makarrata' in the Yolngu language — between Indigenous Australians and the Federal Government. The ambition was not to be realised. Nessie was awarded a Medal of the Order of Australia in 1985, in recognition of her community work. She passed away in 1995.

Many Aboriginal leaders in Victoria today express their admiration for Nessie. As well known locally for her craft work as her activism, she was a popular member of the Bairnsdale and Gippsland community. Never one to accept disadvantage or injustice as a forgone conclusion, Nessie faced challenges head on: the result being stronger, healthier communities and a role model to inspire future generations.