A source of wisdom and strength for her community. 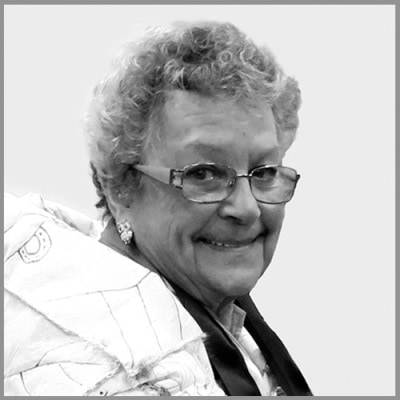 Aunty Nancy Carol Harrison is a respected Wotjobaluk Elder from the Wimmera-Mallee region of north-west Victoria. She is actively engaged in uniting her community through her cultural knowledge, her artwork and her spirit of good will.

Born in Horsham in 1941, Nancy grew up with her 7 siblings at Antwerp, a former mission reserve near Dimboola. Her parents were Margaret Kennedy, a Wotojobaluk woman, and Athol Harrison, a Gunai/Kurnai man. Nancy's mother, along with her siblings, was born on the river bank between the reserve and the Ebenezer mission. While the mission had closed in 1904, the reserve was kept for those who remained in Antwerp, but most of the old people moved to Lake Tyers, Dimboola and elsewhere.

On her mother's side, Nancy's great great grandfather Jungunginnyook, was well known for his tracking skills and his involvement in finding the lost Duff children near Horsham in 1864. He was also a member of the first Aboriginal cricket team which toured England in 1868.

Nancy recalls a happy childhood at Antwerp where her father worked for the railways, in his 'holidays' harvested salt at Pink Lake near Dimboola and also worked on the vegetable gardens there. Nancy's parents were very resourceful. Her father built the family a house with 'a big vegie garden down near a billabong, heaps of chickens and 3 cows'. Her mother bottled fruit, made jam and sewed clothes on her treadle machine, all thanks to the Weekly Times newspaper.

Nancy and her brothers and sisters walked the 3 miles to the Antwerp State School where their teachers treated them well and taught them to stand up against racism. Nevertheless, the children were warned that if they went to Dimboola they should 'always go up with someone', never by themselves, as 3 of Nancy’s cousins had been 'taken by the welfare'.

A long and varied career

In the 1950s Nancy's family moved to Burrumbeet near Ballarat, where her father believed they would find employment. Nancy went to Ballarat West High School and after completing Year 10, began work as a shorthand-typist at the Royal Insurance Company in Ballarat. She worked in the insurance industry for nearly 10 years in Ballarat and Melbourne. She then moved to the State Electricity Commission and worked in various accounting and secretarial roles for 12 years.

In her fifties, Nancy decided to retire but soon became bored. Her retirement coincided with a time when the Department of Defence was offering jobs to Aboriginal people, so Nancy joined the administrative team with the Royal Australian Air Force in St Kilda Road, Melbourne. Before moving to Seymour, Nancy transferred to the Army and worked at the Puckapunyal base. She finally retired 13 years later.

In 2003 Nancy moved back on to her traditional country at Dimboola and immersed herself in community activities associated with her Wotjobaluk heritage. She became deeply involved with native title negotiations, alongside her brother Rocky (Samuel) Harrison, particularly in providing her knowledge of the continuing connection with the land. The land under negotiation included Antwerp and other reserves, as well as parts of the Little Desert and Wyperfeld National Park near Jeparit.

Nancy was Chair of the Barengi Gadjin Land Council Aboriginal Corporation when they gained their Native Title Determination in 2005. This was the first time the Federal Court had recognised native title in Victoria. To ensure she had the necessary skills to lead the Land Council, Nancy completed a governance course at Swinburne University. In her leadership role Nancy is particularly skilful in working across clan groups and connecting with a range of organisations and communities. She also takes an active role in addressing lateral violence concerns, working to overcome negative behaviours within the community. Nancy also became involved with Monash University in the revival of the Wotjobaluk Wergaia language.

Her warmth and personality is appreciated by students

Nancy is often called on to speak to school children, at both primary and secondary level, about Aboriginal art and culture. Her warmth and personality is appreciated by the students she has mentored either individually or through group projects. She generously volunteers her time to help children reach their potential and has been an active participant in the Department of Education's Koorie Education Workforce. Nancy also gives talks to university students who are learning about the natural and cultural history of the Grampians/Gariwerd National Park and Mt Arapiles areas. She has been actively involved in archaeological digs at Ebenezer mission and in local Landcare projects.

Nancy's interests are not limited to those of the Aboriginal community

Nancy is a talented artist and proud to have her artwork used by local company Mt Zero to package their pink salt products. Nancy has also worked with other elders on the Possum Skin Cloak Project, an artwork produced for the 2006 Commonwealth Games. The cloak represented the stories of the traditional owners of the land, past and present. Nancy recalls her father was also an artist and made boomerangs using a heated wire to inscribe designs. Nancy's drawings also feature in the locally published book Yanga Track - Wanjab, Gadjin and Murnong, a collaboration with other artists and writers, including her nephew Louie Rigney.

Nancy's interests are not limited to those of the Aboriginal community. She is also a valued member of the Country Women’s Association (CWA) and often contributes to CWA shows and competitions with her cooking and artwork.

As a well-respected Wotjobaluk Elder Nancy is often called on to give the Welcome to Country at ceremonies and events. Her most memorable Welcome was delivered at the Spirit of the Bush music festival in 2007 where she addressed 20,000 people.

Now in her seventies, Nancy's involvement in community life remains undiminished. She continues to be a source of wisdom, strength and inspiration for her family and her people.