A builder of brighter futures 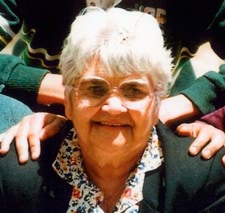 Melva Johnson is a beloved Yorta Yorta and Wemba Wemba Elder, and a champion of Aboriginal education and health. She has taken a leading role in setting up community services around Echuca, and been a source of valuable encouragement and guidance to young and old alike.

She was born in 1934 at the Cummeragunja Mission, on the New South Wales side of the Murray River. In 1939, her family participated in a mass 'walk-off', leaving the mission in protest over poor conditions. They settled near Mooroopna on the banks of the Goulburn River.

Melva has always respected family. Her grandmother was her idol and she lived with her for much of her childhood. Her parents instilled in her a sense of pride that she carried into adulthood. She left school at 13 years of age, worked at the local hospital and, at 15, moved to Melbourne. At 21, she met and married her husband, Kevin, in New South Wales. They moved to Echuca, where Melva returned to hospital work. She had four children, two of whom have sadly passed away.

Melva was no stranger to the prejudices of the times. She gave birth to two of her children on the verandah of the Echuca hospital, as she was not allowed in the maternity ward. She saw Aboriginal children segregated at school and educated only to the minimum level, as she herself had been. This was the reality for her community. As a new mother, the concern for her own children's future was profound.

In 1974, Melva joined with other community members to found the Echuca Aboriginal Co-operative. They were inspired by an Aboriginal rights movement making real progress in Melbourne. Melva and the dedicated group of women who ran the Co-op wanted a better life for their children. With hard work and tenacity came results. The Co-op began to address the neglect inherent in local health and education, restoring people's self confidence at the same time. Melva served as administrator for eight years and remains a member of the Board. Today the Co-op is known as the Njernda Aboriginal Corporation and its programs range from housing and employment to cultural activities, child care and justice.

Acting in the Co-op's name, Melva pushed for recognition and support from local council, health professionals and the education department. She influenced policy change and campaigned tirelessly for funding whenever it was needed. In the 1980s, Melva helped secure funds to purchase a property for a Women and Children's Safe House. Melva was employed as coordinator and from the building a range of specialist heath services were offered in the region for the first time.

In 1976, Melva started an Echuca Education Group. A few years later she involved herself with the Victorian Aboriginal Education Association (VAEAI). She is a life member.

For 15 years Melva ran a bingo night, the proceeds of which bought school books, lunches and equipment for children that needed them. It also funded a play group. Later, Melva fought for the funding to establish a Multifunctional Aboriginal Child Care Centre in Echuca — a VAEAI initiative that promotes early childhood learning, while fostering cultural identity and a sense of community belonging. Support is continued right through a student's school life. Since the centre opened, over 70 local Aboriginal children have gone on to complete their VCE. Before, that number had been zero. Melva remains a passionate advocate for quality education; a believer that with pride and self-esteem children can achieve anything.

Melva's standing in the community has been reflected in her involvement with a wide variety of organisations, including the Aboriginal and Torres Strait Islander Commission (ATSIC) and the Victorian Aboriginal Community Controlled Health Organisation (VACCHO), where she served as chairperson. She has sat on the Echuca Hospital Board and Aboriginal Housing Board, among others. Today she is the chairperson of the Local Aboriginal Education Consultative Group.

There have been awards in recognition of her work. In 2002 she was inducted to the Victorian Honour Roll of Women. She has received a Centenary Medal, Rotary Award, Community Justice Award and, in 2011, became the first Aboriginal person to receive the Bishop Noel Daly Award for leadership in Catholic education. The Victoria University's Echuca campus and a student residence at Deakin University in Geelong are named after her.

Where there has been progress made in her local community in recent decades, Melva has been at the heart of it. She has changed minds and reformed thinking, all the time representing her family, her people, and the greater community, with dignity and integrity. Never asking more than for a fair go, Melva has created a brighter future for many.