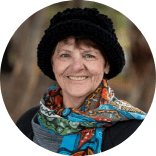 Aunty Margaret Clarke is a proud Muthi Muthi woman who has dedicated her life to supporting the Aboriginal and Torres Strait Islander community in education, out-of-home care, community services, health and aged care: “My family is of the Muthi Muthi clan, bordering Victoria and New South Wales. My Indigenous heritage comes from my Dad’s side (Clarke) and my mother was non-Indigenous”.

Marg was born in Drouin in Gippsland, Victoria in 1948 where her father worked at the timber mill after returning from World War II, as jobs were hard to find in the city. The family then moved to South Melbourne where Marg went to kindergarten. As her father’s Aboriginality was not recorded during enrolment in the army, it meant he was able to apply for and be issued ownership of a War Service Home in Glenroy.

Marg and her siblings were raised by her father and stepmother in Glenroy where she attended the Glenroy primary school and then attended high school at Pascoe Vale Girls School. In the 1960’s at the age of 14 she was sent to work for her stepmother’s mum who ran a boarding house. At 16 she saved up and went to Adelaide where she stayed at the Young Women’s Christian Association (YWCA) and found work at a sandwich shop for ten months before moving back home.

When Marg was 18, she returned to South Australia in 1969 and has spent most of her adult life there. She married and has a daughter. Marg is very proud of her daughter. Born with severe deafness, Marg’s daughter had a successful 10-year career working for the National Theatre of the Deaf. She performed around the world before becoming a producer. Marg’s daughter now teaches Auslan at TAFE SA for deaf children and their families, as well as supporting new Auslan teachers.

Marg was then employed as a Student Counsellor at the Aboriginal Task Force Unit at the SAIT where she worked to support Aboriginal and Torres Strait Islander students. She continued her study part-time in Anthropology, Archaeology and Research Methods at the Adelaide University.

Marg then moved to Canberra to work for the Australian National University (ANU). After six months she was approached by Adelaide University and worked there for a few years. She has been instrumental in establishing Aboriginal Support Student Units in the tertiary education sector.

Marg returned home in 1993 and worked in South Australia at the College of Advanced Education, known today as the University of South Australia, where she taught Cultural Awareness to police cadets due to the racist attitudes of police and the high number of Aboriginal deaths in custody at the time. She then went on to work at the South Australian Aboriginal Child Care Agency to take on the role of Senior Social Worker.

In 1993, Marg moved back to Victoria and worked for the Secretariat of National Aboriginal and Islander Child Care (SNAICC). She has worked in many other Victorian Aboriginal community organisations for over the past 26 years where she has made valuable contributions, including the Victorian Aboriginal Community Services Association Limited, Link-Up Victoria and the Aborigines Advancement League (AAL). Marg has contributed to the AAL with her research into the Aboriginal men and women who have served with the Armed Forces in various wars since the 1880s. This research is proudly displayed each year at the AAL headquarters where the Anzac Day Aboriginal Dawn Service is held. Marg is currently employed by Victorian Aboriginal Community Controlled Health Organisation Incorporated (VACCHO).

In addition to her achievements in community services, Marg has also worked to assist Aboriginal Victorians to reconnect with their families, culture and community through her work with Link-Up Victoria: “Through my work with Link-Up I have been involved in a number of successful reunions, but unfortunately trying to reunite children with their parent(s) hasn’t always been a positive experience”.

In the last 26 years Marg has been a Board Member for many organisations, including the Victorian Aboriginal Child Care Agency, The Stolen Generation Committee and The Aboriginal Community Elders Services Incorporated.

“For me, there are three main areas in my life that give me strength and courage to go on when the odds are against me. The first, is our Elders who I admire and respect; I shudder to think where we’d be today if not for them and their fight for Aboriginal rights. My second, is my passion for genealogy and, in particular, my own Aboriginal family history. I have a need to find out who my Ancestors are; who determined my Aboriginality, culture, spirit and, of course, my genetics. Last, but not least, is my writing—both personal and at VACCHO”.

Marg’s dedication to the care of her community is remarkable. She continues to be committed to improving the lives of those around her. Her ongoing resilience, strength and determination to support Elders and reconnect Aboriginal and Torres Strait Islander Victorians to family and culture is truly inspiring.