A big-hearted student of life 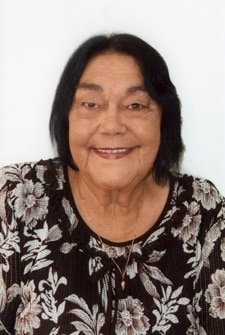 Lorraine 'Bunta' Patten was a Gunditjmara Elder unafraid to speak out against injustice or stand up for the underdog. From lobbyist to artist, she made an impact wherever she directed her passion.

Born in 1941, Aunty Bunta grew up on the Framlingham Aboriginal Reserve near Warrnambool, where she lived with her grandparents and siblings. A self-described tomboy, she was nicknamed 'Bunta' because of her resemblance to the comic strip character Billy Bunter. It stuck for life.

When her grandmother died, Aunty Bunta was sent to live with a non-Indigenous aunt in Melbourne. She attended school in Fitzroy, a suburb home to a growing Aboriginal community.

Aunty Bunta was almost entirely deaf but for years this went undiagnosed. As a child, she heard little more than the kookaburra's laugh. She taught herself to lip read, but struggled at school. It was only when a sympathetic teacher suspected what was wrong, and wrote to her aunt, that her hearing was tested. She was fitted with two hearing aids. Emerging from the hospital onto a busy Melbourne street, Aunty Bunta was so startled by the noise that she burst into tears.

Although she left school at 13 — the school system afforded Aboriginal children no support or encouragement to continue study — Aunty Bunta satisfied her thirst for independent learning with books. She entered the workforce, taking a service job at a private school, then factories, before settling into secretarial work.

Fitzroy was the centre of Aunty Bunta's world and in the 1960s and '70s it was a hotbed of political activism. She frequented local pubs that served as important meeting places for those leading the Aboriginal rights movement. It was around this time that a key community figure, Aunty Edna Brown, approached her in need of help. Aunty Edna organised monthly cabarets and socials, to raise money for an Aboriginal Funeral Fund. Aunty Bunta began to manage the catering for the fundraising events. Proper burials were expensive at the time, but the alternative was burial as a pauper, upright in an unmarked grave. The Fund helped avoid this indignity.

In the late 1980s, while working as a project officer in Aboriginal Affairs for the Victorian Government, she chanced upon an unanswered letter in a file. It had been written many years earlier by Aunty Edna and another prominent Elder, Stewart Murray, seeking support for an Aboriginal cemetery in Melbourne. Aunty Bunta was inspired to take up the cause. She helped formalise a campaign, all the while keeping up internal pressure. Her persistence paid off. In 1992, the deed to a block of land in Greenvale was secured. Funding was also secured to establish a morgue, crematorium and other related services. The Weeroona Aboriginal Cemetery was Aunty Bunta's proudest achievement, serving as chairperson for 10 years. It is a site of great importance to the Aboriginal community.

Aunty Bunta married Herb Patten, now best known as Australia's leading gumleaf player. Together they ran a hostel in Greensborough for six years, offering shelter and support to those young Aboriginal people who needed it. In 1982, while setting up a hostel in Mildura, they took on responsibility for an intellectually disabled man named Trevor 'Turbo' Brown — now an artist in his own right.

In 2000, Aunty Bunta and Uncle Herb decided to undertake a Diploma in Aboriginal Arts through the RMIT Indigenous Arts Unit. During the course, Aunty Bunta produced evocative charcoal drawings that have been praised for their strong sense of country. In 2005, she won the Deadly Art award at the Victorian Indigenous Art Awards. Aunty Bunta proved so popular at RMIT she was elected representative for Aboriginal Student support, working to ensure a fair go for Indigenous students. She was also a leading member of the Elders Arts Group.

Aunty Bunta served as a regional councillor to the Aboriginal and Torres Strait Islander Commission (ATSIC) and participated in the work of the Victorian Aboriginal Community Service Association (VACSAL). She was secretary on the board of the Victorian Aboriginal Legal Service and was involved with the Whittlesea Reconciliation Council and Aboriginal Advancement League. Her damper, cooked from a recipe passed down to her from her grandmother, was always an eagerly awaited treat at National Aborigines and Islanders Day Observance Committee (NAIDOC) events.

As a down-to-earth student of life, Aunty Bunta was a role model for Indigenous and non-Indigenous people alike. She taught us that, with perseverance and a big heart, we can all make a positive difference.