A leader both humble and determined. 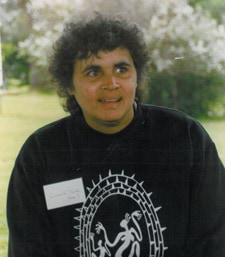 Aunty Linda Twite was a woman who combined humility with a fierce determination to see better outcomes for Aboriginal people, particularly in the communities around Gippsland. She poured her heart into her work and overcame countless obstacles in an effort to unite the divided.

Born in Orbost in 1954, Linda grew up in the East Gippsland town of Buchan. She was one of seven children born to Sid and Joyce King. Her father, a Gunditjmara man, worked at a local timber mill for most of his life, while her mother, a descendant of the Monaro people of New South Wales, cared for Linda and her siblings. They were the only Aboriginal family in town and were accepted members of the close-knit community. Linda attended Orbost High School and was a talented athlete in her youth; a runner who excelled at sports like basketball.

It was during her first job interview out of school that Linda was introduced to the casual racism so often experienced by Aboriginal people at the time. A prospective employer told her that she would never acquire the skills necessary to hold down a job. Rather than deter her, the comment served to strengthen Linda's resolve to find work and help support her family. She went on to secure a clerical role at the Bairnsdale Town Council, before moving to a position with the East Gippsland Regional Library Service, where she worked for several years.

At the age of 17, Linda met Rob Twite, a non-Aboriginal man, at a Bairnsdale boarding house where she was living with two of her brothers. Linda and Rob later married and went on to share over 40 happy years together. The couple relocated to Melbourne, where Linda successfully applied for a job at Monash University's Aboriginal Research Centre. For 11 years, she worked as a library officer at the university, and was much loved by staff and students.

Linda studied part-time to qualify as a library technician. It was a notable achievement at a time when Aboriginal students were still a rare sight on university campuses. Linda supplemented her full time work with a role as relief manager at an Aboriginal hostel in Melbourne.

From a young age, Linda had involved herself in Aboriginal affairs. In the early 1970s, she joined with 19 other Aboriginal women to march from Lake Tyers to Bairnsdale, with the aim of drawing attention to the inadequacy of health services in the area. This direct action led to the establishment of the Gippsland and East Gippsland Aboriginal Cooperative (GEGAC), of which Linda was a founding member.

In the 1980s, Linda and Rob returned to Gippsland and settled permanently in Bairnsdale. Linda began full-time employment at GEGAC, working alongside several of her siblings. As an integral part of the hard working team, she coordinated the Family Group Home and was instrumental in establishing a range of services, including a foster care program, birthing service and drug and alcohol treatment.

Linda was appointed chief executive officer of GEGAC in 1991, a position she held until 2002. During this time she oversaw its growth into one of the largest Aboriginal service providers in Victoria. She set up initiatives such as the Krowathunkooloong Keeping Place and established traineeships for the unemployed. Today, the organisation employs more than 100 people and delivers a range of medical, social and welfare services to the community.

A skilled mediator, Linda helped resolve conflict within communities and acted as a liaison between Aboriginal and non-Aboriginal people. It was often said there was no one that she couldn't talk to. Linda took the time to get to know individuals personally and would never forget a name. She could be as patient or assertive as a situation demanded, but did not raise her voice and inspired trust in all who knew her. Her standing in the wider community was recognised with a place on the Bairnsdale Regional Health Board. Linda was one of the few Aboriginal people to sit on a mainstream committee at the time.

Initially as a Koori Court Officer, then, from 2008, as the Aboriginal Community Liaison Officer (ACLO) for the Bairnsdale Police, Linda worked tirelessly to improve relations between the Aboriginal communities of Gippsland, the police and the justice system. She was considered an asset to both roles by everyone from magistrates to local politicians, and brought with her invaluable experience in a range of areas. She had barely settled into her role as ACLO when she demonstrated her skills as a negotiator, assembling a contingent of local Aboriginal people from different communities to help marshal New Years Eve celebrations. The result was widely praised. When illness forced her to retire from the role, it was noted by a senior policeman that she would leave ""four pairs of shoes to fill"".

Known locally as an avid collector of everything from teaspoons to coins, Linda was also fascinated by her heritage and worked fastidiously to piece together her extended family tree. She passed away in 2011; far too young for those who knew she had so much more to give. Possessed of wisdom beyond her years, Linda's legacy can be found in the countless lives that were improved through her efforts. She is truly a role model for all.