Visionary and advocate for self-determination. 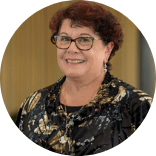 Karen Heap is a proud Yorta Yorta woman and a well-respected leader within the Victorian Aboriginal community. Karen has followed in her mother’s footsteps as a remarkable leader who has given back to her community. Karen is a visionary and active advocate for self-determination for the Aboriginal and Torres Strait Islander community in Victoria.

Born in New Zealand in 1961 to Valmai Heap and Alan Heap, who moved to New Zealand for better opportunities and to raise a family, Karen is the oldest of two. Karen and her brother Ian were home schooled as children due to living on the remote Chatham Islands. After relocating to Greymouth, New Zealand, they attended Greymouth High School.

Karen began her working life with many different jobs. Her first job was at the age of 16 years old, working at a local pharmacy. Karen then moved to Australia at 19 and lived in Sydney, working at a pharmacy, a sausage shop and then as a receptionist. In 1982, Karen moved to Ballarat, Victoria to be closer to her parents after they decided to return home from New Zealand after their involvement in anti-apartheid protests during a tour by South Africa’s national rugby team.

After moving to Victoria, Karen began her professional career proudly working alongside her mother at the Ballarat and District Aboriginal Cooperative (BADAC). Karen then entered the Australian Public Service and Victorian Public Service, which led to senior roles within the sector. Improving the lives of Aboriginal and Torres Strait Islander people became the driving force for Karen, seeing her join the community sector to take on executive roles.

Karen’s roles have included: Secretary of the Cultural Education Program at BADAC; Koorie Education Officer within the Department of Education and Training (Victoria); Aboriginal Vocational Officer at the Commonwealth Employment Service; Home and Community Care worker with Wathaurong Aboriginal Corporation, Geelong; roles at the Office of Aboriginal and Torres Strait Islander Health (Commonwealth Government); Assistant Manager for the Indigenous Unit for Corrections Victoria; the first Executive Officer for the Regional Aboriginal Justice Advisory Committee (Barwon South); and the current CEO

In 2004, Karen was appointed CEO of BADAC. Since then, Karen has been responsible for the strategic vision and significant expansion of the organisation. Over the past 15 years, she has utilised her vast knowledge, skillset and extensive experience within the Aboriginal service sector to successfully grow the organisation.

Karen has introduced a full health unit and a wide range of family support services, including family violence programs, social and emotional wellbeing, kinship care, mental health, drug and alcohol, housing and justice. Family service programs include home and community care for Elders and people with disabilities, maternal and child health and Stolen Generation support workers. Since becoming CEO in 2004, her staff has increased from 15 to 112 and is still growing. In her 15 years as CEO, BADAC has become a thriving community space.

One of Karen’s most notable achievements is the vision and delivery of BADAC’s brand new $6 million dollar medical facility, which provides extensive, modern medical and allied health services in one holistic health facility and provides the community with a culturally safe service.

In 2019, Karen was invited to Canberra to help to shape the Close the Gap refresh to better measure Aboriginal people’s health and wellbeing. Karen currently sits on the Central Highlands Regional Partnership group to ensure Aboriginal issues and perspectives are considered by State and Local Governments when choosing major priorities for the region. She continues to work hard to advocate for a healthy and self-determining Aboriginal and Torres Strait Islander community. “It is important to be involved at both a State and Federal level, in shaping policy and delivering programs as we work towards Closing the Gap for our people.”

Due to her commitment to the ongoing strengthening of the Aboriginal and Torres Strait Islander community of the broader Ballarat region, Karen is widely regarded as an inspirational leader by her staff and colleagues, government agencies and bodies, and most importantly by her community.

Karen is an advocate for encouraging non-Aboriginal people to walk with Aboriginal people in fighting for rights, justice and self-determination, as well as working and engaging with community in a culturally appropriate manner.

Karen has worked tirelessly to champion young Aboriginal people’s wellbeing. She pioneered efforts in Ballarat to keep Aboriginal children with members of their family when out-of-home care is necessary. Karen’s support to the Ballarat community through establishing and advocating for innovative prevention, intervention and family reunification has been both visionary and effective.

Even though Karen works without the need for recognition, her leadership, determination and drive has made a significant difference to the lives of Aboriginal and Torres Strait Islander Victorians. Her vision, commitment and passion to ensure Aboriginal and Torres Strait Islander Victorians live longer, happier and healthier lives is truly inspiring.