A leader in Aboriginal affairs. 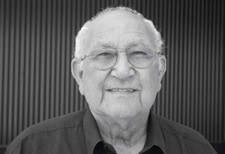 Uncle John Atkinson - known widely as Uncle Sandy - was a Bangerang Elder and leader in Aboriginal affairs in Victoria. While he had an extensive record of service to his local community, the impact of his work, particularly in the areas of Aboriginal culture, art and languages, had been felt far beyond the Murray Goulburn region he called home.

The second eldest child of Daniel and Myra Atkinson, John was born at the Cummeragunja Reserve, on the New South Wales bank of the Murray River, in 1932. His father worked as a shearer, while his mother cared for their 11 children.

John had a happy childhood, which revolved largely around the river. He and his siblings were rarely out of its cool waters during summer months. When it flooded, they would build boats out of tin and float around collecting duck eggs. John learnt how to hunt and fish at a young age; skills he used to provide additional food for the family. He attended the school at Cummeragunja until he was 14 years old.

After early jobs spent milking cows and collecting mail, John became a shearer alongside his father, who had established himself as a successful contractor. The trade provided John with regular employment for many years.

In 1953, John married Gwen Thorpe. The couple had five children. The family lived in Griffith, Barmah and Mooroopna before settling in Tatura, near Shepparton, in 1965. There, John drove a cement truck for a time. He and Gwen involved themselves in all aspects of community life and remain highly respected in the local area.

John had been an influential figure in Aboriginal affairs, at a local, state and national level. In particular, he was committed to the promotion and protection of Aboriginal culture. In 1975, while chair of the Shepparton Aboriginal Art Council, John began work to establish Australia's first Aboriginal museum, or 'keeping place', to house important local artefacts and art. He campaigned hard to secure funding and rallied enthusiastic support for the project. He also contributed to the design of the building. Opened in 1982, the Bangerang Cultural Centre, as it is known today, has become a regional tourist attraction and an important cultural institution for the local Aboriginal community. John managed the centre for 11 years.

The Rumbalara Aboriginal Co-operative and Medical Clinic in Mooroopna is another organisation which benefited from John's involvement. Rumbalara was a housing project built to accommodate the residents of a makeshift settlement on the river flats outside the town, most of whom had come from Cummeragunja. The land was to be sold off until the local Aboriginal co-operative fought to secure it for the Aboriginal community. John was instrumental in establishing the medical clinic there in 1981. Today, the organisation provides a range of health, welfare and housing services, as well as social and cultural activities.

Roles with the Museum of Victoria, Victorian Ministry of the Arts and the State Library of Victoria - where he worked on the oral history program - helped cement John's reputation as an important custodian of Aboriginal culture. He went on to serve as National Chairperson of the Aboriginal Arts Board of the Australia Council for six years. He was also the Victorian Commissioner for the Aboriginal Development Commission, established in 1979 to help further the economic and social development of Aboriginal people. These are just two of his several high profile appointments.

John was a trustee of the Koorie Heritage Trust; an organisation he had been involved with since its establishment in 1985, including a period as an education officer. He was the first Indigenous person in Australia to serve on a UNESCO committee. He was a passionate advocate for the preservation of Aboriginal languages. John travelled internationally to highlight the issue of language loss, and was a delegate at an International Language Conference in Italy. He helped found the Victorian Aboriginal Corporation for Languages in 1994 and was vice chairperson of the Federation of Aboriginal and Torres Strait Islander Languages and Culture (FATSILC).

When he was vice chairperson of the Cummeragunja Land Council, John committed to the future of the land he grew up on. He was known for his work with young Aboriginal people, to whom he offered encouragement to pursue higher education opportunities. In 2006, he ran a series of workshops to pass on the traditional skills of canoe making to a new generation. He was also a member of the Rotary Club of Shepparton for many years.

A talented musician, John taught himself to play the pedal steel guitar in his youth - making him one of the first Aboriginal people to master the instrument. Music was a constant in his life, and John performed around the country, including appearances at the Gympie Music Muster in Queensland and Tamworth Country Music Festival in New South Wales. Over the years he taught many local people how to play guitar. In 1983, John was made a Member of the Order of Australia, in recognition of his service to Aboriginal arts.

With his gift for diplomacy and strong work ethic, Uncle John achieved much in his life time. He remained an energetic force who continued to work for the benefit of Aboriginal and non-Aboriginal people in his community and beyond.