A humble inspiration to all 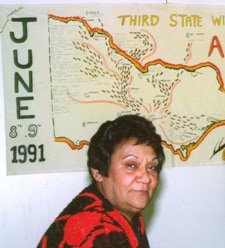 Joan Robinson was a woman whose pride in her Aboriginal heritage inspired and enlightened all who knew her. She was a dedicated member of the Aboriginal Catholic Ministry in Victoria from its inception.

Aunty Joan was born in 1939, on the Murray Downs Station near Balranald in New South Wales. She was a Mutthi Mutthi woman with strong ties to her country at Lake Mungo. All throughout her life she worked to deepen her knowledge of her heritage. Joan described how relaxed visiting the dry bed of Lake Mungo made her feel; how close her ancestors seemed. In particular she acknowledged the importance of the discovery, in 1969, of the oldest human remains in the world to be ritually cremated – those of a woman who came to be known as Mungo Lady. She became an important icon for Joan's people.

One of 11 children, Joan spent much of her childhood in Balranald. She grew up Catholic and would ride horses into town with her family every Sunday to attend church. She received schooling until the age of 13, but continued to teach herself to read and write with the help of crosswords and her Bible.

Joan's father was blinded in an accident and as a teenager she worked to help support her family. She possessed an adventurous spirit, so was unfazed when forced to journey to Melbourne to find a job. Joan would attend Pastor Doug Nicholls' church in Fitzroy, and, for a time, was a popular resident of the Gladys Nicholls Hostel in Northcote. Pastor Doug and his family were known to be very fond of Joan. She also regularly checked in on her own family and served as her father's eyes in the world.

After a number of years working in different factories, Joan began a job with a shoe manufacturer in Preston. As a skiver, she would put the edge on the leather soles of the shoes. Her skills at this were such that she became an asset to the company. Joan loved her job and stayed for 30 years. She was a much-loved member of staff.

Joan married her husband, Les, in 1958. The two were initially pen pals, only meeting face to face in Melbourne when Les came to work on the railways. They were married for 51 years and had one daughter, Vicki. Les was non-Indigenous, and the couple occasionally experienced the prejudice of the times. They weathered it with love and commitment.

In the mid 1980s, Joan helped establish the Aboriginal Catholic Ministry in Melbourne. It began with a group of Aboriginal Catholics who would meet in each other's homes to discuss their faith and their Aboriginal spirituality, strengthening their identity as both. The group also served as an unofficial support network for those with relatives in Galiamble, an alcohol and drug rehabilitation centre in St Kilda. This support was extended to the young men discharged from the facility. In 1988, the group approached the Catholic Archdiocese of Melbourne and successfully requested funds for premises of their own.

Today the Ministry has a wide remit. It runs programs in education and welfare, lobbies authorities, and teaches the wider community about Indigenous culture and history. As a respected Elder, Joan's input into the decision making and development of these programs was invaluable.

Joan was a gifted communicator and participated in the Ministry's cross-cultural workshops. She would engage everyone from school children to businesspeople and public servants. Continually surprised by how little non-Indigenous Australians knew about Aboriginal culture, Joan saw that her responsibility as a Mutthi Mutthi Elder was to counter this ignorance. She is one reason that many people now have a greater understanding and respect for Indigenous identity.

In particular, Joan had an ability to connect with young people. It's one of the reasons why, in the 1990s, she provided advice during the production of an educational video. Produced by the Catholic Education Office for National Aboriginal Children's Day — and featuring Joan's granddaughter, Tamara — the video was shown in primary schools across the state to introduce children to Indigenous stories.

Perhaps Joan's greatest legacy lies in the values she imparted to those in whose life she was so central. Her daughter, Vicki Clark, credits her mother as the inspiration and patron of her Opening the Doors Foundation, which helps Aboriginal children stay in school by covering the costs of necessities such as uniforms and books. In 2011, the Foundation celebrated its 10th anniversary and has provided assistance to over 500 children.

Joan Robinson was first and foremost a cherished mother, wife and friend. A woman of principle, who valued honesty above all else, she inspired and challenged perceptions by remaining quietly true to who she was.