A champion for health, culture and community. 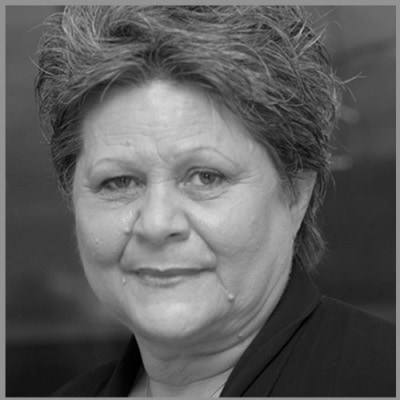 Jill Gallagher AO has never hesitated to seize opportunities to support her community in the pursuit of better health, community autonomy and reclamation of the traditional culture and society of Aboriginal Victorians.

A Gunditjmara woman, Jill was born in the Australian Capital Territory as her parents travelled looking for work. She was 1 of 10 children. Her mother, Frances (nee Winter) grew up at Framlingham in south-west Victoria. Jill's father, of Irish descent, was accidentally killed when she was a baby.

There were few supports for women, particularly Aboriginal women

Jill spent her childhood in Gippsland, where her mother, like many Victorian Aboriginal people of the era, found seasonal work picking vegetables. This was a time before the emergence of Aboriginal organisations and there were few supports for women, particularly Aboriginal women. The seasonal camps in which the family stayed became their community. An abiding memory for Jill is of a campsite by a river in the evening, dotted with the glow of dozens of campfires.

Jill’s family moved to Collingwood in 1963 when she was eight and her mother found work in a box factory. They had very little. Jill, who had by then attended 19 different primary schools, finished her primary education at George Street Primary School, but only had a short time in secondary education at Fitzroy Girls School. Rebellious and disobedient, she clashed with teachers and left school at the age of 14 to find factory work.

She grasped the opportunity to reclaim knowledge of traditional culture, language, stories and people

In her early twenties, Jill regretted her lack of education. Now with a child of her own, she wanted more from life than factory work and realised that education would help her to support her family.

Jill was fortunate to come across a training scheme for Aboriginal young people, introduced by then Victorian Education Minister Joan Kirner. She was thrilled to be accepted and began training at the Museum of Victoria. She took advantage of access to the professional development offered there and later took up a position at the Victorian Archaeological Survey. More importantly, she grasped the opportunity offered by the Museum's collections to reclaim knowledge of traditional culture, language, stories and people that had been impacted by white settlement and the devastation it left on Aboriginal people.

She saw an opportunity to rediscover truths about Aboriginal society before European settlement and to pass this knowledge on to young people. Jill became a firm advocate of the importance of Aboriginal voices in the collection and management of their heritage, maintaining this passion in a further role as manager of the Heritage Branch of Aboriginal Affairs Victoria.

Jill was and is still is very passionate about the repatriation of Aboriginal cultural property, and the return of ancestors for reburial, being very active in this field since its beginnings in the 1980s. She worked at the Museum of Victoria when the Aboriginal Legal Service fought to have the Murray Black collection of Aboriginal remains returned to Victoria from institutions such as the University of Melbourne and the National Museum of Australia. Although she moved out of the Aboriginal heritage field in 1998, Jill remained passionate about its importance. For many years she continued to serve on the National Committee for the Repatriation of Skeletal Remains.

Jill was aware that these organisations had been founded to offer meeting places where Aboriginal communities could be visible once again in the landscape. She reinforced VACCHO’s role in supporting its member organisations to stay true to their community beginnings. She also refined and modified their practices to improve health outcomes for Aboriginal Victorians.

Since 2000, VACCHO has offered training for Aboriginal Health Workers via its status as a Registered Training Organisation. Constantly seeking ways to improve health outcomes for Aboriginal Victorians, VACCHO now collects and analyses data collected by its member organisations in order to strengthen their services.

As the CEO of VACCHO since 2001, Jill has seen the organisation grow significantly with current staff numbers at 75. VACCHO has developed innovative preventative and educational health programs, including the Well Person’s Checklist, the Koori Maternity Services Program, and a successful diabetes education initiative.

One of Jill's proudest achievements was gaining bipartisan support for the vital 'Statement of Intent' signed by the Victorian Premier in August 2008 on behalf of the State government. This statement pledged to close the gap between Indigenous and non-Indigenous Australians in life expectancy, educational achievement and employment opportunities. In 2010 Jill was inducted to the Victorian Honour Roll of Women. In 2013 she was awarded an Order of Australia in recognition of her strong and effective leadership in Aboriginal health.

She has also been a well-respected member of a number of State government and statutory advisory committees, including the Victorian Early Childhood Development Advisory Committee, the Equal Opportunity Commission Victoria Indigenous Reference Group, the Child Death Review, the Cooperative Research Centre on Aboriginal Health, and the Premiers Aboriginal Advisory Committee.

Jill cites her early career mentors, such as Jim Berg of the Koori Heritage Trust and Terry Garwood of Aboriginal Affairs Victoria, as great influences on her life, inspiring her with the confidence to believe in herself. But most of all she continues to be inspired by her mother’s determination and resilience in the face of everything she endured.