A tireless worker for social justice. 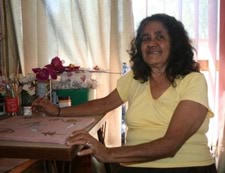 As a hard-working mainstay of the Swan Hill community, Aunty Ivy Bell had devoted much of her life to the needs of local Aboriginal people, through roles in welfare, health and justice. She brought patience and empathy to all she did, and provided a safe and loving home to those most vulnerable during her many years as a foster carer.

Born in Balranald in 1944, Ivy was the second eldest of 11 children. Her parents were Arthur and Lorna Wise, and she is a descendant of the Mutti Mutti and Nari Nari people of New South Wales. Her father was a woodcutter by trade and during the earliest years of Ivy's life the family was regularly on the move. They finally settled in Swan Hill in 1948. Ivy went on to graduate from the local high school.

One of Ivy's first jobs was at a local chemist, where she earned a reputation as a conscientious worker. She subsequently worked for a number of years in the print room of the local newspaper, and was employed for a time by the Swan Hill District Hospital. Ivy met Ricky Bell in 1968 and married him in 2004.They had six children.

In 1982, Ivy enrolled in university and later graduated with a degree in Applied Social Science, specialising in Aboriginal Welfare. She subsequently spent 10 years as a foster care worker and, over a 20-year period, fostered 16 children herself.

For many years, Ivy contributed to the work of local Aboriginal organisations, including the Swan Hill and District Aboriginal Cooperative and the Swan Hill Aboriginal Health Service. She was an active member of the Wamba Wamba Local Aboriginal Land Council and also helped establish a meeting place for women in the town. Between 1990 and 2002, Ivy served as a volunteer on the Aboriginal community justice panel in Swan Hill, making herself available 24 hours a day to assist Aboriginal and Torres Strait Islander people taken into custody.

Throughout the district, Ivy was recognised as a representative voice for the Aboriginal community. She brought an Aboriginal perspective to several high profile events, including the Women on Farms Gathering in 1995, where she had invited participants to learn more about the culture of her people.

Ivy sat as an Elder on the Swan Hill Koori Court, part of the Magistrates' Court of Victoria. She was regularly involved in local NAIDOC Week events and was the chief organiser of the debutante ball in 2012. Ivy was known to organise fundraising events for charities such as the Save the Children Fund.

A gifted artist, Ivy engaged new generations with Aboriginal culture through her work. Using traditional techniques, she carved intricate designs onto emu eggs and produced striking charcoal drawings, which have been exhibited locally and around the state. Ivy was an enthusiastic champion of young local artists, some of whom have been shortlisted for Victorian Indigenous Art Awards with her support.

Proactive in all she did, Ivy's keen understanding of the social justice issues affecting Aboriginal people earned her a reputation as an upstanding member of the local community. Committed to all she did, Ivy worked without the expectation of reward but in the hope of changing lives for the better.