A man of wisdom and compassion. 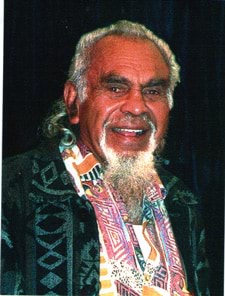 Uncle Henry 'Banjo' Clarke was a man who cast a spell on all who met him. Renowned for his compassion and wise words, he promoted respect and forgiveness between Aboriginal and non-Aboriginal people long before the term 'reconciliation' was coined.

Banjo was born on the Framlingham Mission, east of Warrnambool, in 1922. His father was Francis Clarke, a Gunditjmara man, while his mother, Mary Edwards, grew up on the Cummeragunja Mission and had ancestral ties to Tasmania. Banjo was the second youngest of nine children. The moniker 'Banjo' was given to him by an uncle, who considered his habit of making up rhymes reminiscent of the bush poet Banjo Patterson.

Although Banjo did not formally attend school, his Gunditjmara Elders imparted a wealth of traditional knowledge to him, often contravening Mission rules to do so. Banjo learnt how to hunt and fish using traditional methods. He was taught about the culture, language and history of his people. The Elders also instilled in him the principles of tolerance and sharing, by which he lived his life.

During the Depression years, Banjo and his family moved to Fitzroy in search of work. He was eight years old when he got his first job in a shoe factory. He also worked with his father on the construction of the Sylvan Reservoir. Although he came to divide his time between city and country, his heart remained forever in the bush.

Banjo set out from home at the age of 12 years, swag over his shoulder. In the years that followed he worked as a labourer, woodcutter and fruit picker. After a stint at a sawmill in Tynong North, he was invited to stay on by the owner, whose daughter taught Banjo to read and write.

On return visits to Melbourne, Banjo would hang out at the boxing gymnasium where his brother, Frank, trained. Banjo took up the sport when he was 15 years old and proved talented enough to be recruited by the famous tent boxing troupes of Harry Johns and Jimmy Sharman. He toured agricultural shows around the state and won a Victorian title. Banjo went on to box intermittently for over 25 years.

During the Second World War, Banjo attempted to enlist but was encouraged by officials to join the Allied Works Council instead. For 14 months he travelled around Australia assisting with the construction of roads, including one through the heart of the Northern Territory to Darwin. He was also involved in the clean up effort after the bombing of Darwin.

Although he encountered pockets of racism during this period, Banjo refused to harbour resentment towards the perpetrators, and his dignified approach earned him the support of many non-Aboriginal men. In 1998, Banjo was belatedly awarded the World War II Civilian Service Medal for his services during the war years.

Banjo returned to Framlingham shortly before the end of the war. In 1945, he married Audrey Couzens, with whom he had nine children. Tragically, three predeceased him. Banjo had two additional daughters, as well as many grandchildren and great grandchildren.

Throughout the 1950s and 60s, Banjo worked in a local stone quarry to support his family. Life had its hardships. Although he separated from his wife, the two remained close; Banjo was devastated when Audrey passed away unexpectedly in 1973. It was one of several tragic episodes that influenced Banjo's decision to join the Baha'i religion in 1975. He was attracted by its followers' commitment to tolerance and respect for all cultures, which mirrored his own values as an Aboriginal man.

In 1976, the Framlingham community began a decade long campaign to secure land rights over their forest. Banjo mobilised his people and a blockade was set up in 1979. The peaceful protest, led by Banjo, garnered significant media attention. He starred in a 1984 film, The Fighting Gunditjmara, which promoted their cause. In 1987, victory was achieved when the Federal Government handed back 1,130 acres to the Gunditjmara people. By then, Banjo had earned the respect and admiration of people across the country, including from senior political figures.

In his role as caretaker of Framlingham Forest, Banjo welcomed visitors from across Australia and the world to his home. Thousands were eager to meet him and he turned no one away. His wisdom was sought on matters great and small. Nowhere was Banjo more treasured than in Warrnambool and its surrounding district. He was a gifted storyteller and visited local schools to teach children about Aboriginal culture.

In 1993, Banjo helped organise a concert that grew to become the town's annual Tarerer Festival. It attracts artists such as Banjo's nephew, Archie Roach, who wrote several songs inspired by him. Banjo opened the Port Fairy Folk Festival every year from 1995 – a tradition carried on by his son, Lenny. When his house in the forest was destroyed by fire, the community rallied to build him a new one.

Uncle Banjo passed away unexpectedly in 2000. He was buried at Framlingham. Obituaries appeared as far afield as London and his memorial service attracted a huge crowd. Although he experienced the worst of people at times, Banjo only ever saw the good. He believed that love and compassion could change the world; for that he will always be remembered as truly special.