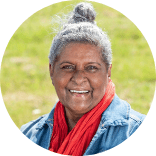 A highly-respected and admired Elder, Aunty Helen Belle Bnads is a proud Birri Gubba woman from the Bindal Group in Ayr, Queensland with direct family ties to the Cherbourg Aboriginal Mission (Queensland). Helen is a health professional and academic who has worked across the southern metropolitan region for many years. She practices a holistic approach to improve health and wellbeing outcomes for Aboriginal and Torres Strait Islander Victorians.

Helen was born in Brisbane, Queensland in 1952 to Ivy Monica Appoo and father Percy Bell who was born at Cherbourg Aboriginal Mission. Helen is the second oldest of ten children. Her parents were caring and loving and created a nurturing environment for her and her siblings growing up in Brisbane. However, once Helen entered primary school, her early years

at school were horrendous due to the severe racism and abusive treatment by the State School teachers. Her mother relocated her to a Catholic school, the ‘Daughters of Charity,’ where she spent the rest of her primary and high school education and was treated kindly. Her education thereafter was delivered without abuse and racism. This ignited a love of education that has never stopped.

To this day, Helen is still friends with the Head Nun from the ‘Daughters of Charity’ and her classmates. Once she reached Year 10, at the age of 15 and with the blessing of her parents, she went to Newcastle to study nursing. Becoming a nurse was important to Helen because as a child she suffered from severe eczema and tuberculosis. “Being on the other side of health I knew that you never treat anyone without compassion and empathy.” As a nurse, “you see people at their most vulnerable and bravest, and I am lucky to be working here using all my skills”.

Helen returned to Brisbane and commenced registered nurses training. While nursing Helen met her now former husband who was visiting from Melbourne at a dance in Brisbane. She then followed her heart and moved to his hometown in Victoria where they married in 1973 and had two daughters, Beth and Nadine. Helen is now a grandmother to six grandchildren. Helen has lived in southeast Victoria for almost 50 years.

With the support of her former husband and her in-laws, Helen returned to study when her daughters were toddlers. She finished Year 12 before attending Monash University as a mature-age student, completing a double degree in History and Human Geography, majoring in Asian and Australian History, Anthropology and Archaeology. This was followed by a Graduate Diploma of the Arts in Public Policy, Ethnic Relations and Religious Studies. Helen then worked at the Australian Trade Commission before returning to Monash University as Director of the Aboriginal Education and Research Unit, where she supported staff and students.

One of Helen’s most notable roles was as an oral history interviewer for the National Library of Australia, which involved recording individual stories by Aboriginal Victorians and Queenslanders that formed part of the 1997 Bringing Them Home: Report of the National Inquiry into the Separation of Aboriginal and Torres Strait Islander Children from Their Families.

Helen went on to use her professional health background to focus on community healing. In 2010, Helen completed a Diploma of Narrative Therapy and Counselling. Helen became Manager of the Social Emotion and Wellbeing Counselling Unit, Link-Up Queensland, assisting with reunions for the Stolen Generations survivors through bringing families together and encouraging healing.

Helen has continued her lifelong passion for learning and is currently completing studies in Clinical Pastoral Education whilst working full-time at Peninsula Health. Helen’s numerous qualifications give rise to a diverse professional background in health, academia and the public service, as well as mentoring and public speaking. Helen also worked for Reconciliation Victoria. She is a respected and active Elder at the Bunjilwarra Koori Youth Drug/Alcohol Healing Centre in Hastings and the Dandenong Magistrate’s Children’s Court and Adult Court. Helen also volunteers in the Drug Court there. In addition, she is a champion for a local Aboriginal Arts Enterprise called Baluk Arts on the Mornington Peninsula.

During her time in Victoria, Helen has advocated for young Aboriginal and Torres Strait Islander people by becoming an Aboriginal role model and mentor for the Australian Football League at the St KiIda Football Club. Furthermore, Helen has worked tirelessly in Aboriginal liaison and policy roles in the health sector and local government, and has contributed to numerous boards, advisory boards and committees—including the Indigenous Sports Foundation, Uniting Care Connections, Interfaith Centre of Melbourne, Southern Metropolitan Cemeteries Trust, Indigenous Working Group for Homeless, Willum Warrain Aboriginal Gathering Place, and many more.

Today, Helen primarily holds an executive role at Peninsula Health as the Elder/Cultural Lead after four years as the Aboriginal Hospital Liaison Officer assisting with social and emotional wellbeing, healing and palliative care. In this role she has initiated an annual Peninsula Health Balert Balert Bus Tour in order to raise awareness and build connections between hospital staff and administrators and local Aboriginal Community Controlled Organisations (ACCO’s) and their communities. The Balert Balert Bus Tours were recognised in the 2018 Victorian Public Healthcare Awards for in the category of Highly Commended: Improving Indigenous Health.

Helen has a long legacy as a role model and mentor, in the fields of health, academia, arts, healing, spirituality and reconciliation, which has established her as an important leader. She is renowned for her integrity, compassion and respect. Helen’s long and multifaceted career in Aboriginal health and public life is a source of inspiration for both Aboriginal and non-Aboriginal people in Victoria.