A tireless campaigner for human rights 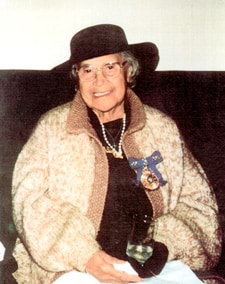 Geraldine Briggs rose from tenacious activist to dignified Yorta Yorta Elder. She was an inspirational leader and remains an enduring role model, particularly for women across Victoria.

Geraldine was born in 1910, on the Warangesda Aboriginal Mission in New South Wales, and grew up on the Moonacullah Aboriginal Reserve near Deniliquin. She was the great granddaughter of Barkabillie, a leader of the Dhulanyagan Clan of Ulupna.

As a child, she often visited her grandfather at the Cummeragunja Mission, on the banks of the Murray River, before moving there herself after she married. By this time conditions at Cummeragunja — once a thriving, self-sufficient settlement — were beginning to deteriorate as the New South Wales Aborigines Protection Board took greater control.

Several painful episodes provided the catalyst for her future activism. Geraldine would never forget the removal of her sisters, Margaret, May and Evelyn, who were taken away to the Cootamundra Girls Home when she was a child. As a young mother, her grief at losing a son to illness was further compounded by the refusal of the mission manager to take the family to Echuca to seek medical help. Similarly, Geraldine often spoke of a time when three children at Cummeragunja died in a single day.

Geraldine's family was involved in the famous Cummeragunja 'walk-off' in 1939. The spontaneous protest took the form of a mass desertion by some 200 residents. As Geraldine put it, ""we were tired of being bossed about and told what to do like children."" Her family initially moved to the Flats, on the banks of the Goulburn River in Mooroopna, before taking up residence in the town itself. Later they settled in Shepparton. In the 1980s, one of Geraldine's daughters, Hyllus Maris, made a four-part television series called Women of the Sun that detailed the walk-off.

Geraldine and her husband Selwyn, who ran his own wood contracting business, supported the establishment of the Australian Aborigines League by William Cooper, and worked with Selwyn's cousin, Pastor Doug Nicholls, in the early days of the Aborigines Advancement League (AAL). At one point the couple ran a regional branch of the League out of Shepparton. Shortly after, in 1958, the Federal Council for the Advancement of Aboriginal and Torres Strait Islanders (FCAATSI) was established. Its creation reinvigorated the civil rights movement and Geraldine was at the forefront of much of its work. She never missed a national conference and encouraged her daughters' involvement as well.

Geraldine poured her energies into campaigning for equal rights, particularly concerning citizenship. When FCAATSI campaigned for a 'yes' vote in the 1967 referendum to amend the Australian Constitution and include Aboriginal people in the national census, she rallied support and distributed how-to-vote cards. She went on to become the Victorian State Secretary of FCAATSI in 1970.

Geraldine believed women could play an integral role in improving outcomes for their communities, particularly where health and housing were concerned. In this spirit, she was a founding member of the United Council of Aboriginal Women. In 1968, she travelled with 120 women to Canberra in support of the tent embassy outside Parliament House.

In 1970, Geraldine helped establish a Victorian Aboriginal and Islander Women's Council with other prominent women of the time, including her sister Margaret Tucker. This in turn inspired a National Aboriginal and Islander Women's Council to be formed in 1972. Geraldine was the first president. The Council lobbied government on issues such as cultural preservation, land ownership and the employment of Aboriginal welfare workers.

Where services for the community were lacking, the women established organisations to fill the void. Their efforts led to the Victorian Aboriginal Health Service and the Victorian Aboriginal Legal Service being set up. Whether establishing temporary accommodation for those forced to travel from their home countries, or raising much needed funds for welfare projects, or visiting prisoners, Geraldine involved herself wherever she could be of use.

Her standing in the community was further recognised with a position on the advisory committee of the Victorian Minister of Aboriginal Affairs. In 1991, she received the Order of Australia. Today, her name adorns a new student residence at Monash University's Clayton campus and an Aboriginal hostel in Shepparton. She was inducted to the Victorian Honour Roll of Women in 2001.

Affectionately known as Aunty Gerry, she was never happier than when in the company of family – hers extended far and wide, and took in many unrelated by blood. Her own children have become prominent Victorians in their own right, working across a variety of fields, with a shared admiration for their mother's work and the positive influence she was in their lives.

Geraldine passed away in 2005. With her pragmatic approach to all she did, her accomplishments delivered real results and benefits to the lives of those she campaigned so tirelessly for. Always strong willed, Geraldine possessed pride, compassion and respect, and inspired these things in everyone who crossed her path, be it in Victoria or beyond.