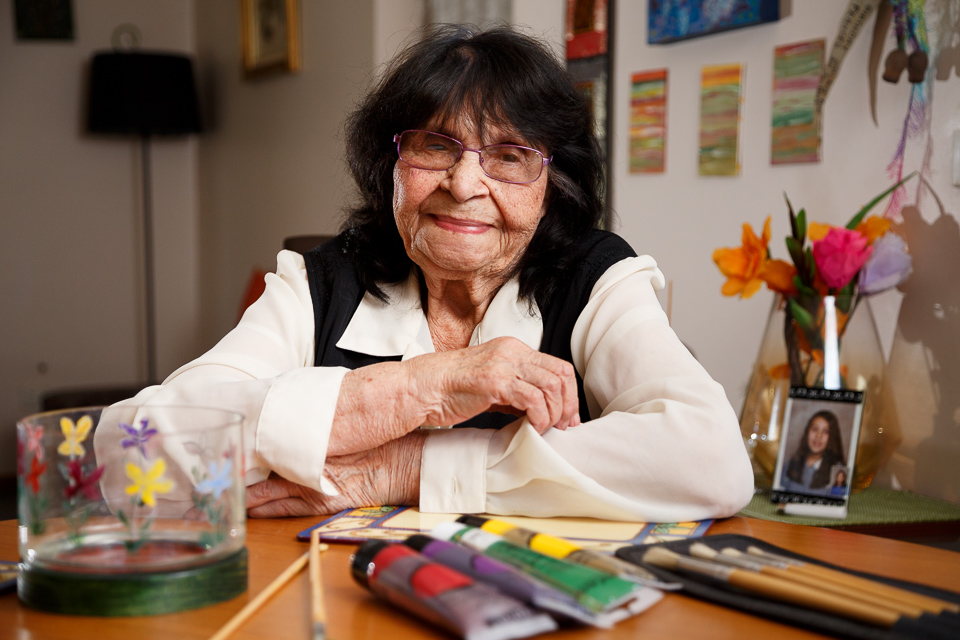 Gunditjmara Elder Frances Gallagher has an unwavering commitment to social justice and has worked in many roles to make a difference in people’s lives in whatever way she can. Frances was born in Bendigo, one of Violet Ella Winters’ 8 children. She was raised by an aunt at Framlingham in western Victoria where living conditions for residents during the 1930s were described as ‘pitiable’. Educational opportunities for children at Framlingham were very limited and Frances received little schooling.

At 16 Frances moved to Hamilton where she worked at a flax mill. She recalls that racism was rife, but she rose above the taunts, remembering that the land on which she was walking was her people’s land. Her first husband was killed in a road accident, leaving her with 8 children to raise. Like many Victorian Aboriginal people in the 1950s, she scraped together a living by picking fruit and vegetables, moving from place to place to follow the work.

Standing up for what was right

In the 1960s Frances moved to Fitzroy, where there was a growing Aboriginal community. Finding work in one of the many factories in Collingwood, she became all too aware of discriminatory and racist practices on the part of employers and some fellow employees. However, this did not deter her from ‘standing up for what was right’ when she witnessed unfair practices.

In the 1970s and 1980s there was a growing momentum in Victoria to establish Aboriginal community controlled services to improve health and welfare and advocate the rights of the Aboriginal community. Frances welcomed the opportunity to work in organisations which were directed by Aboriginal people and operated in culturally appropriate ways.

During this time she worked in a number of Aboriginal hostels. These included the Lady Gladys Nichols Hostel for young Aboriginal women and the Elizabeth Hoffman (now Morgan) House for women and children escaping violence or homelessness. She also worked at the Margaret Tucker Hostel established in 1983 to provide refuge for vulnerable young women at risk in the criminal justice system or of being placed into care. She also worked for a time at the William T Onus Hostel for the homeless. Work in the hostels was not always easy. But Frances was delighted to find that encouraging a sense of personal dignity and pride, while offering understanding and sympathy, was a more effective way of helping people than the rigid authoritarian practices imposed on Aboriginal Victorians in the past.

In 1982 the Victorian Aboriginal Health Service opened Koorie Kollij to train Aboriginal Community Health workers. Frances, then 60, was one of the first to enrol.

Working within the community

Frances was one of the first Elders to serve on the Broadmeadows Koorie Court when it was established in 2004. Concerned that many offenders committed crimes because of confusion over their Aboriginal identity, she addressed defendants at their own level. She encouraged their sense of self-worth by reminding offenders that while they were ‘as good as anyone else’, they also had responsibilities to their families and their community.

Frances is dedicated to the welfare of Victorian Elders. She was one of a number of Victorian Elders, led by her friend Iris Lovett- Gardiner, who raised funds and campaigned for government support to establish culturally appropriate care for Elders. The result was the Aboriginal Community Elders Service (ACES) which opened in Brunswick in 1991. She later served as an ACES Board member.

Always up for a yarn

Aware of the isolation and loneliness of many Elders in her own area in Whittlesea, Frances offered her own home as a place where they could find a welcome cuppa and a yarn. She also provided advice to the local council about how they could assist Elders living in the community.

Frances also took her own initiative by asking the Council to provide a meeting place for Elders. Her vision was for a space where Elders could meet for a yarn and also run their own activities. The result was Elders Making a Difference which commenced in 2014 and runs a planned activity program for local Elders who get together twice a week.

Never one to let obstacles deter her, Frances enrolled in a Visual Arts course at Royal Melbourne Institute of Technology University in her eighties. Specialising in painting, she earned a Diploma in Visual Arts and her work has been included in a number of exhibitions. Frances had 10 children, 4 of whom have sadly passed away. She can now boast a family that includes grandchildren, great-grandchildren and great-great-grandchildren.

Now in her nineties, Frances maintains her indomitable spirit, calling out injustice, discrimination and paternalism when she sees them. Acutely aware throughout her life of the limitations imposed on Aboriginal people by discriminatory practices, she continues to walk with dignity and a sensitive, compassionate heart, still striving to make a difference wherever she can.