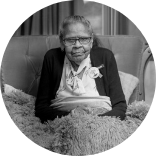 Aunty Eunice Wright is a highly respected Gunditjmara Elder, activist and an important advocate for Stolen Generations survivors. She has dedicated her life to the community services sector and to advocating for human rights and rights relating to the care and wellbeing of Aboriginal children.

Eunice was born in 1944 in Hamilton, Victoria and is one of five children born to Charles ‘Monty’ Foster and Lyall Foster. Eunice had a happy upbringing with her siblings, Valetta, Gloria, Ronnie and Glennis, at the Lake Condah Mission near Hamilton until she was forcefully removed and incarcerated at the age of nine.

Eunice’s mother was very sick in hospital with tuberculosis on the day authorities came to the house at Lake Condah and removed her and her siblings, Gloria and Ronnie. Her father was away working and earning money for the family, and the children were being cared for by family. Eunice and her siblings were taken to Heywood Police Station and locked up in the police cells for the night. The next morning, they appeared before a judge in the Heywood Court where many family members, including their Aunty Fanny and Uncle Angus, came to inform the court they were caring for the children. The court rejected their claim to have custody and sadly this was denied for all three children.

Eunice and her siblings were then transferred to Melbourne Royal Park Receiving Centre for Children, where she and her sister Gloria were separated from their baby brother Ronnie who was only six at the time. This trauma still affects her today. She and her sister were then placed and grew up in an orphanage in Ballarat, with little contact with their mother, father and family. The family drifted apart when they left the facility. Eunice bravely testified at the Australian Human Rights Commission’s National Inquiry into the Removal and Separation of Aboriginal and Torres Strait Islander Children. Her testimony became evidence and is included in the Bringing Them Home Report released in 1997.

On 13 February 2008, Eunice was one of two Victorian representatives, and one of many members of the Stolen Generations survivors invited to Parliament House in Canberra to witness the Apology given by the former Prime Minister, Kevin Rudd. She later joined Kevin Rudd and former Prime Ministers, Gough Whitlam, Bob Hawke, John Keating and Malcolm Fraser, and all Stolen Generations members for morning tea after the Apology. This was an important day for her and her family, as the Apology was testimony to the injustice done to Aboriginal and Torres Strait Islander communities.

Eunice has faced many obstacles over her life and has survived the trauma of removal. She is the only remaining member of her family and has endured more heartache than many of us could bear with the loss of her family, Country and culture. She strongly advocates and pushes for all Stolen Generation survivors in Victoria, especially the Elderly, to receive compensation and justice for the pain and suffering caused by the forceful removal from their families.

Her childhood prompted her to be involved in community services and to advocate for human rights. Eunice went on to complete a Certificate in Childcare in her 40s through the Victorian Aboriginal Child Care Agency (VACCA) and went on to work at Yappera Children’s Service Co-Operative Limited (Yappera) for over 12 years.

Eunice is a distinguished Elder in her community and many of the children she cared for during her time at Yappera fondly speak of her and her positive influence on them as children. She has worked hard to support children in her care who have suffered from the intergenerational impacts of past policies at a time when there was little to no support services. But Eunice was an important support, as she understood the need to adopt a holistic and trauma-informed care approach.

She was also the first worker at Yappera to join the union and helped pave the way for childcare workers’ rights, including better pay and conditions. Through this advocacy Eunice was instrumental in improving the employment conditions of her fellow childcare workers.

Eunice eventually retired and returned home to Country, buying a property with her late husband, Jimmy Wright. Eunice’s greatest achievement has been her family of four children, 14 grandchildren and 20 great-grandchildren. She is proud that her children have kept their connection to Country and that they all continue to pass down culture and their family stories.

Eunice is also proud that her family know her story of being stolen and for her continued advocacy and education at their workplaces, schools and community. Eunice has experienced profound trauma and overcome many obstacles due to being legislatively removed from her family and community. Eunice’s motto is, “speak up against wrongs and injustices among your people, fight the good fight, always listen to your mob, and help others less fortunate”. This motto stems from her childhood living on Lake Condah Mission.

Eunice is a true inspiration to the Victorian Aboriginal community. By sharing her story with younger generations and the wider community, she demonstrates remarkable courage, selflessness and resilience. She continues to inspire the next generations with her ongoing strength and resilience.

Even though she is not in good health, Eunice is currently advocating the Victorian Government for a redress scheme for Stolen Generations. She has been protesting on the steps of Parliament House in Melbourne and has met with the politicians

to have her voice heard for the injustices inflicted upon her and her family, and all Stolen Generations survivors. She intends to advocate until a redress scheme is implemented in Victoria, as in other states in Australia. She continues to leave a powerful legacy for her family and community.

Eunice Wright is the epitome of the Fighting Gunditjmara; a warrior for her people.