For more than 5 decades of service and ongoing support for Aboriginal children, families and communities. 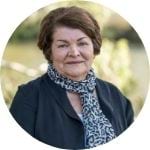 A passionate, energetic and strong woman

Aunty Elsie Coates is a proud Yorta Yorta and Wamba Wamba woman who was born in 1947 at Finley, New South Wales to Elsie and George Rafferty, the second of 6 children. She has 4 children and 4 grandchildren.

Elsie’s fondest childhood memories are of her family visiting her Aunties, Uncles and cousins who were living on 'The Flats.' a well-known and significant cultural area located on the floodplains between Shepparton and Mooroopna. Her family also lived there for short periods over a number of years, depending on the work available for her father. "Dad worked hard, and mum cared for us children (along with all the Aunties). We were always outside, playing and enjoying the fresh country air - they were happy times. Life was hard, but it was good, because we had each other and [we were] in a place with many other Aboriginal families that had a sense of strong community spirit."

Elsie is a passionate, energetic, strong and staunch woman, who has broken down barriers and touched and enriched the lives of many generations of Aboriginal and Torres Strait Islander people by serving as an Elder, role model, mentor and educator.

She continues to make measurable impacts on the lives of others, particularly those who are vulnerable or less able to help themselves. Elsie has been in the workforce for over 50 years, in many roles, advocating and working for families and children. She has dedicated her life to working and supporting communities across family services, education, justice, out-of-home care, community services, health and aged care.

She has been inspired by the dedication of many of her people who have spent their lives working tirelessly for the betterment of all Aboriginal people. She also ensures the significance of cultural and family knowledge is being retained, shared and passed on for future generations.

In 2017 Elsie was awarded Kanamo Ganbo, the Wathaurong community’s NAIDOC Elder/Respected Person of the Year Award, for her outstanding service. Elsie also works as Cultural Awareness Support Officer, Barwon region, for the Victorian Department of Health and Human Services (DHHS). She assists child protection case managers with developing Cultural Plans for children in care "to see our children move forward, to see our children going home, and if they can’t go home, to see them in the best possible placement, surrounded by their culture."

Elsie has worked for more than 10 years as Cultural Awareness Support Officer for the Barwon region. In addition to assisting and supporting children, families and child protection case managers, Elsie educates DHHS staff on understanding the importance of Aboriginal children being connected to their culture.

Some 20 years ago, Elsie was appointed as 1 of 3 community representatives to the Wathaurong Aboriginal Community Justice Panel, to advise on local justice issues for community, and assist community members interacting with the police and justice system. Elsie continues to participate on the Victorian Government’s Local Aboriginal Justice Advisory Committee for the Barwon region.

Elsie also worked for over 20 years at Wathaurong Aboriginal Co-operative in children’s and family services. As a single mother with a young growing family and working at the Co-operative, she was acutely aware of the disconnect and hardships experienced between the services provided by government and what was needed within her community, and she strongly advocated for the need for better access to services.

Other outstanding achievements include her appointment as a Bail Justice and being involved in the 1987-1991 Royal Commission into Aboriginal Deaths in Custody.

In 1986 Elsie returned to education as a mature age student at the Institute of Koorie Education, Deakin University. She was part of the first intake of the Koorie Teachers Education Program.

As an Elder in her family, Aunty Elsie represents the first Koorie family attending the independent Maharishi school in Reservoir in northern Melbourne, catering for Preparatory to Year 7 students. The Maharishi School’s Coates Family Scholarship is named after three generations of family 'who embody the school’s values,' and so acknowledges that Elsie is grandmother to 2 former students, Isabella and Alexandra, from her son Tim. The Coates family is acknowledged through this scholarship for a legacy of joy, love and learning that lives on through the scholarship. The Maharishi School now has a pathway arrangement with Bubup Wilam Aboriginal Child and Family Centre in Thomastown, whereby children from Bubup Wilam progress to attending the Maharishi School under the scholarship.

Elsie has seen many babies born, watched children grow and achieve, in education, work, in the local community and go on to become parents themselves. She has been with families during hard and difficult times, supporting them through loss, grief and trauma. Her contribution to others becomes all the more impressive considering the many personal and social challenges that she has witnessed.

She has inspired her entire community through her pride in her heritage and through her initiative to educate, share knowledge, understanding and experiences about culture. By sharing this knowledge with her colleagues, Elsie has directly influenced the discourse that is now being imparted in her workplace, which then creates strong ties for service provision to the local community. She has made a lasting, sustainable legacy within her community, workplace and wider community.

Elsie is known as one who gets on with the job without seeking accolades. She is a humble, dignified and quietly spoken Elder - a true leader in community with her cultural wisdom, life experiences and practical wisdom - as she cares for, nurtures, strengthens and shapes the many relationships and connections for Aboriginal people. Through her work she has subtly and effectively improved the lives of Aboriginal children and families over a very long time.

Her dedication to the care of her community is extraordinary and her ongoing resilience, strength and determination to support children in reconnecting to family and culture is truly inspiring.

Elsie is recognised for her exemplary initiative and leadership, and for her sustained and selfless service. She is honoured for her impressive achievements over more than five decades of service and ongoing support for Aboriginal children, families and communities.