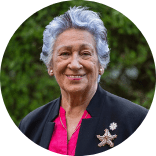 Professor Eleanor Bourke is a distinguished Wergaia/Wamba Wamba Elder, whose outstanding leadership and tireless dedication advancing Aboriginal education and communities has spanned over 40 years. She has made a significant contribution to Aboriginal affairs and human rights. Eleanor has contributed to the Victorian Aboriginal Treaty Working Group as a member and Co-Chair. She has provided strategic guidance and advice to the Treaty Commissioner supporting the establishment of the First Peoples’ Assembly of Victoria.

Born Eleanor Anderson in Hamilton in 1943, Eleanor and her family moved to Murraydale, near Swan Hill in rural Victoria in 1945. She attended primary school at Murraydale: “As the only Aboriginal child I was made very aware of being different”.

Eleanor and her siblings grew up surrounded by a large family of aunties, uncles and cousins. Her grandmother instilled pride in her heritage and culture. Eleanor has been involved in Aboriginal rights and women’s rights since the 1960s: “I was inspired by the older Aboriginal women at the Aborigines Advancement League and I became more aware of the political side of things”.

In 1976, she gained a Diploma of Arts (Journalism) at the Royal Melbourne Institute of Technology (RMIT). Again, Eleanor was the only Aboriginal person in her class. Whilst studying, Eleanor met and married her husband, Colin. She has two daughters, Sia and Kelly, and is stepmother to Christopher, Richard, Annmaree and Matthew.

Her professional career has taken her to the Australian Capital Territory and South Australia. Eleanor has held executive positions in community, state and federal government agencies, and was Co-Chair of Reconciliation Victoria for three years, promoting deeper understanding and respect between Aboriginal and non-Aboriginal people.

She was a member of the management committee of the Victorian Aborigines Advancement League, as well as the instigator and member of the building committee that resulted in the League moving to its Thornbury premises. She was also an inaugural member of the Camp Jungai Cooperative Limited.

Eleanor was the Chairperson for the Victorian Aboriginal Heritage Council (VAHC) from 2006 until 2018. In this role she was a part of the Transition Working Group to 2007 heritage legislation amendments that gave Registered Aboriginal Parties (RAPs) new governance responsibility. She also played a central role in the Documentary Working Group on Ancestral Remains and the Ancestral Remains Joint Steering Group. Eleanor further worked on the Joint Shared Values with Heritage Council Victoria. She also chaired meetings with stakeholder groups associated with the VAHC’s work in Melbourne, Geelong, Bendigo and Lorne.

Eleanor has further been involved with and chaired the Right People for Country Steering Committee, co-chaired the initial Winyula joint management committee, and was a Native Title Services Victoria board member.

Eleanor was Professor of Aboriginal and Islander Studies and Director of Aboriginal Programs at Monash University after which she retired from her full-time career in 2001.

Eleanor has always believed that education is the key to better understanding and a better life. Her journey has taken her to Harvard University in the United States of America (USA) and the University of British Columbia (Canada).

Due to Eleanor and her husband Colin’s dedication to human

rights and education Monash University has named a scholarship in their honour called the Colin and Eleanor Bourke Indigenous Postgraduate Scholarship that supports the ongoing education of Indigenous students undertaking a postgraduate coursework degree.

In 2008, Eleanor was invited to attend the World Indigenous Peoples Conference on Education (WIPCE) in Melbourne where she was recognised for her work in Aboriginal education. In 2010, she was inducted into the Victorian Women’s Honour Roll as a Respected Person and Warrior of Education.

Eleanor continues to raise awareness of Aboriginal history including Aboriginal people’s experience of dispossession. She emphasises the importance of recognition of sovereignty and Aboriginal and Torres Strait Islander peoples’ rights to respect, identity, and self-determination.

“My goal is to see that recognition of Traditional Owner groups is carried through to all aspects of everyday life, beyond just cultural heritage matters.”