A much-loved elder and master craftswoman. 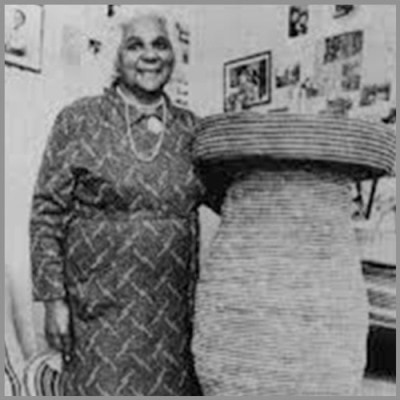 Aunty Constance 'Connie' Hart (nee Alberts) is remembered as a dignified Gunditjmara woman who did not like a lot of fuss. In her quiet way, she ensured significant cultural and family knowledge was retained, shared and passed on to future generations.

She learned it was best to hide traditional ways

Connie was born at Little Dunmore on Gunditjmara country in Western Victoria. Her grandfather, Henry Alberts, moved his family there to escape the restrictions of life on nearby Lake Condah Aboriginal Mission, where practising traditional language,beliefs and crafts was discouraged. Connie’s father, Angus, grew up at Little Dunmore. Her mother, Frances (nee Carter) grew up on the mission. There she learned it was best to hide traditional ways and adopt 'white people's ways of doing things.'

Lake Condah Mission closed not long after Connie was born, but the community continued to use the mission school and church. As a child she watched her mother and other women weaving baskets which they sold to raise funds for the church. Connie was eager to learn how to weave, but her mother was afraid to teach her, saying she had to learn only 'white people's ways'. Connie, a curious child, quietly observed her mother and the other women at their craft whenever she could and would 'sneak a stitch or two' when her mother left the room.

Connie made her mark in Melbourne

Like many Gunditjmara people, Connie moved to Melbourne looking for work in the 1930s. She lived in Footscray and later Carlton. During World War II Connie worked at the same Footscray ammunition factory as Margaret Tucker. Connie met and married Donald Hart at this time. Connie was a talented pianist and played in concerts to raise funds for the Australian Aborigines League. She used her home in Melbourne as a welcoming base for visiting community members, including her brother, when he was on leave from active service during World War II. After the war, she worked at St Vincent’s Hospital and in a shoe factory.

Whenever she could Connie would return to Little Dunmore where her son, Don, lived with his grandparents, but also welcomed family members to Melbourne for holiday treats.

Education for the younger generation

In the early 1960s, Connie returned to her country to nurse her elderly mother who was in poor health. After her mother died, she moved to Portland, working as a cleaner and providing loving care to her nieces, nephews and grandchildren. Well-known and respected by many in Portland, she made a point of passing on family knowledge to the younger generation.

Family members remember that she always made sure they knew who they were and where they had come from. Connie kept a photographic collection of the families and children associated with Lake Condah. When members of the Stolen Generations came home searching for their people, Connie was able to tell them where they belonged.

Connie kept quiet about her knowledge of weaving until she was in her sixties. She was frightened that if she shared this cultural knowledge with members of her family, their children would be taken from them. When her nieces finally persuaded her to teach them how to weave in the 1980s, she conducted the first classes behind locked doors, with the curtains firmly closed.

As she wove, she told stories. Her nieces spread the word about Aunty Connie's skills and she gradually began to share her knowledge more widely, teaching the many people who flocked to her classes. Her nieces and great-nieces remember learning at her knee as she patiently shared her craft. They have fond memories of going out into the paddocks to find and pick the local Puung ‘ort grass to use for weaving.

Many galleries and museums in Australia have collected examples of Connie’s craft. Her work is greatly admired for its precision and order. She conducted classes and demonstrations for many cultural institutions.

Connie used her craft to revive valuable cultural knowledge of Gunditjmara practices thought to have been lost. Remarkably she was able to recreate from memory the traditional woven eel traps used by the Gunditjmara to farm eels on the swamps at Lake Condah. Historians have used her knowledge and traditional practices to better understand Gunditjmara history.

Her legacy lives on

Connie did not slow down with age. She was in great demand as a teacher and craftswoman, but also served her own community. She was an inaugural board member of the Winda-Mara Aboriginal Corporation and of the Local Aboriginal Education Consultative Group, the first such group established in Victoria. Sadly, Connie passed away long before Gunditjmara Native Title was officially recognised in 2007. She had helped to achieve this recognition by making sure members of her family and community knew their history.

Until the end of her life Aunty Connie was loved and respected by many in the south-western Victorian community. Her legacy lives on, not only in the craft practised by members of her family, but in the wider cultural knowledge that she preserved and generously shared.