A gifted artist with a passion for learning. 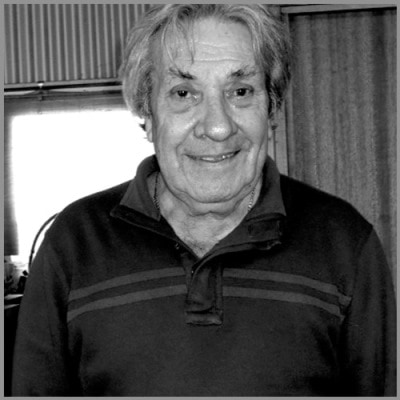 A Yorta Yorta and Dja Dja Wurrung man, Clive Atkinson has combined careers as a successful graphic designer, artist and educator. He has used his considerable skills to celebrate and promote Aboriginal culture in his own community and to the wider world.

Clive was born in Mooroopna in 1940, a year after his parents, Clive and Iris (nee Nelson), joined with others in walking off Cummeragunja Mission to protest its restrictive rules and poor living conditions. Like many who left the mission, the family settled on the Mooroopna river flats, living in humpies which often flooded in heavy rain.

Clive’s father, a shearer by trade, was determined that his 5 children would have a better education than his generation had been allowed. He found work in Echuca and moved the family there when Clive was 7 years old.

Encouragement for his natural ability to draw and paint

Clive attended Echuca State School, where teachers encouraged his natural ability to draw and paint. Iris also nurtured her son’s talents and entered his paintings in local art shows, which he frequently won. Teachers at Echuca Technical College further supported Clive’s artistic talents, arranging a scholarship so that he could continue to study art at the school. Though his teachers hoped Clive would become an art teacher, he was drawn to a career in commercial art and pursued this dream after finishing Year 10. After a short stint in Melbourne working as a commercial artist for Myer, Clive started an apprenticeship with the Riverina Herald in his home town. Along with learning the printing and linotype trade, he contributed cartoons and caricatures to the paper.

Clive seized every opportunity to learn

Clive’s lifelong interest in learning from those around him led him to London and then Canada when his apprenticeship finished. Overseas he gained work experience with large commercial presses and completed a Diploma in Advertising and Marketing in Vancouver. Keeping in mind his mother’s advice not to ‘try to be better than anyone, only try to be equal’, Clive seized every opportunity to learn.

After 6 years overseas Clive felt the call of home and returned to Australia, working with companies in Melbourne before establishing AdverType, a graphic design studio, with a partner in South Melbourne. AdverType serviced advertising agencies and within a few years, was employing 24 people.

In the 1980s Clive sold his share of the business to his partner and went on to form Atkinson, Palmer and Associates, based in Prahran, which performed work for a range of corporate and advertising clients. Clive’s reputation as Victoria’s only Aboriginal graphic artist saw him designing logos and branding for a range of Aboriginal agencies across Australia, at a time when their numbers were expanding.

He recalls that, at the time, many simply adapted the Aboriginal flag as a design emblem. Not content with this approach, Clive created logos and branding based on well-researched rationales. One of his greatest achievements was designing the corporate branding for the Aboriginal and Torres Strait Islander Commission (ATSIC) when it formed in the early 1990s. His memorable design managed to represent two different cultures, bringing the varied elements and symbols together in a coherent and meaningful way.

Clive has designed branding and images for many Aboriginal organisations around Australia. He has also designed campaigns, images and posters for a number of government and corporate bodies, including several series of postage stamps for Australia Post. He was also a co-designer of the Bunjilaka Galleries at the Melbourne Museum in the late 1990s and provided designs for the Australian National Museum’s Indigenous galleries.

In addition to his graphic design work, Clive is a gifted painter and sculptor, exhibiting internationally as well as around Australia. His murals have been commissioned by bodies such as Parks Victoria and Victoria University.

In 1995 Clive realised a long-held dream to move back to his traditional country near the Goulburn and Murray Rivers with his wife Judy and their infant son. Together with Judy he formed Mirrimbeena Aboriginal Education Group, a registered Adult, Community and Further Education agency. Among its programs, Mirrimbeena offers training in the construction of bush furniture, the only such course available in Australia. Its guiding philosophy is based on Aboriginal and non-Aboriginal people working and sharing together with a common interest in education and employment. It is this philosophy which has seen Clive become actively involved in community projects in the Echuca-Moama area. He is a member of the steering committee for additions to the Echuca Hospital and is also involved in the Bridge Arts Project to create an outdoor art installation on the Murray River which will portray the history of the Murray-Goulburn region.

When Judy secured an area of the Echuca Cemetery as an Aboriginal resting place, Clive assisted with the design and layout of the Indigenous section, the first of its kind in Victoria. They followed this achievement with the design of a similar Dreamtime precinct in the Ballarat Cemetery, offering a place where Wadawurrung people can be laid to rest in their own country.

Over his long career, Clive has always valued learning from and working in collaboration with others. He does not seek accolades, and believes that hard work brings its own rewards, but adds that professionalism is all important. ‘Whether you’re designing for the local little flower show or some big organisation, you always treat the project at the same level’.