Raised awareness and broke down the cultural barriers in palliative care. 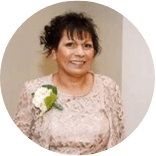 Cherie Waight (nee Britten) made an outstanding contribution to her community through her efforts in palliative care and her tireless work in community. Cherie, a Yorta Yorta woman, didn’t follow a straight path in life and much like the Dhungala river that sustains her ancestral lands there were many swerves, peaks and lows that she navigated in order to not only continue the legacy of her ancestors but to set the example of what it means to lead with compassion.

Cherie was born in 1962 to Nolene Ivy and Robert Britten and was cherished by her older siblings, Robert, Phillip and Jane and her younger brother Ian. Cherie lost her mother at an early age and was raised primarily by her maternal grandparents, Mary and Carey James, and her aunts and uncles. This experience, though tragic formed one of the early lessons in her life of love, compassion and dedication. Cherie recognised need to lift others up, which is something she saw in the work of her grandmother and her aunt Clara Garisou. These strong women were the guiding lights of Cherie’s life and inspired much of her work within the community.

Cherie moved to Melbourne at an early age to commence work in the government service. During this time Cherie met her husband Alex Waight and gave birth to her daughter Nerita Waight. Despite working within government Cherie remained closely tied to her community, sat on a range of boards and was dedicated to organising NAIDOC activities for many years. Cherie saw NAIDOC as a celebration of Aboriginal history and culture. Cherie believed that celebrating the achievements of Aboriginal people was essential to instill pride in Aboriginal children and youth so that they were strong in identity and culture.

In the 1990’s Cherie felt that it was time to leave government service and follow the example set by her family, many of whom devoted their lives to improving outcomes for Aboriginal Victorians. Cherie held a variety of roles in a number of Aboriginal Community Controlled Organisations which eventually led her to the Victorian Aboriginal Community Controlled Health Organisation (VACCHO) where she worked as a Senior Project Officer for the Palliative Care Project. Even as her own health declined, she remained focus on developing access to palliative care for Aboriginal people and ensuring Elders were taken care of. Cherie was passionate this work because she enjoyed listening and learning from the experiences of others – whether it be a story of joy or loss – and this inspired her to do more not less.

Cherie also enjoyed travelling to publicise the efforts being made in Aboriginal palliative care to interstate and international bodies. Cherie hoped that her knowledge would encourage other Aboriginal communities to implement similar practices, so that the dying experience would be about reflecting on the person returning to their ancestors to guide and nurture the next generation as the ancestor spirits have always done. In 2010 Cherie worked in conjunction with palliative care services to develop cultural protocols to govern the way services interacted with Aboriginal people based on the ideals of respect, compassion and understanding.

Through her work with VACCHO, in partnership with Palliative Care Victoria, Cherie undertook a project to boost palliative care services for Indigenous people and developed a number of resources to assist the sector, the community and most importantly affected families. Cherie’s leadership on this project saw the number of Aboriginal people accessing inpatient Palliative Care in Victoria rise from 33 in 2006 to 2007 to 99 in 2008 to 2009. Cherie’s work ensured that Aboriginal communities felt feel free to talk with medical professionals about their expectations and needs through the dying process.

What is remarkable about the work of Cherie Waight is that whilst she was gaining qualifications, awards and changing the health system for many she was battling cancer and she knew this would eventuate in her returning to her ancestors. This did not derail Cherie, it was simply another low and she was sure the river would rise and come the next day she would move on to the next battle. This selflessness and determination was recognised when, after she passed in 2014, the inaugural Cherie Waight Aboriginal Palliative Care Symposium was held in 2015 to celebrate her work and bring together one hundred people from the Aboriginal health and palliative care sectors. The Victorian Minister for Health, the Honourable Jill Hennessy MP, announced funding for a Cherie Waight Aboriginal Palliative Care Scholarship to pay tribute to Cherie’s visionary leadership and commitment to address the gap in Aboriginal palliative care.

Cherie’s lasting legacy is that she is remembered not just for what she did but also for who she was. Her compassionate leadership and empathy guided Aboriginal communities to create and enhance relationships with mainstream service providers and Aboriginal Community Controlled Health Organisations to improve access to palliative care. She was a strong advocate in raising awareness about the needs of Aboriginal people accessing culturally appropriate care because she could innately connect with anyone from any background and communicate the need for collective responsibility. In the words of her daughter, Nerita Waight:

“My Mum's achievements in the palliative care area empowered the Aboriginal community to ensure that their journey to the dreamtime is one of respect and dignity. My mother's legacy is more than the various projects and initiatives she worked on; it is about what she inspired within me, within her extended family and within others in the community.”

Cherie’s remarkable contribution to the Victorian Aboriginal community in the area of palliative care will ensure that the dying process for Aboriginal people is a respectful and positive one.