A compassionate elder who leads by example. 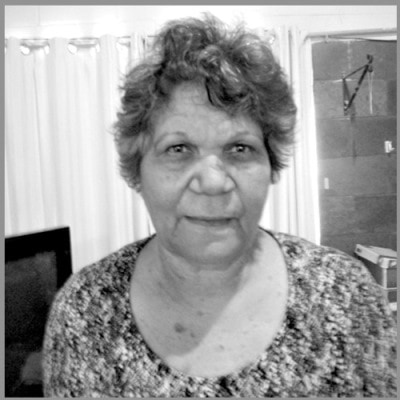 Catherine 'Cath' Solomon has devoted her life to supporting the Aboriginal people of Victoria's Gippsland region. Her untiring efforts to improve community health and resilience have earned the respect of the whole community and touched the lives of many people.

Born in 1939 in Bundaberg, Queensland, Cath is proud to belong to the Tribelang Bunda clan of the Gureng Gureng people. Although she remembers a happy childhood, her family's poverty also left an enduring impression. 1 of 8 children, she walked barefoot to school, even in winter. The memory of her disappointment one Christmas when her parents could not afford presents for the children has never left her, inspiring her to be generous to others, particularly children.

Cath’s father worked as a canecutter and the family's frequent moves to follow the work meant her formal education ended before she reached high school. Gifted and enthusiastic about all kinds of sport, Cath remembers improvising hockey sticks from branches found in the bush and scrounging empty tin cans to use as balls.

In 1957 Cath married Max Solomon, a Manero man from Victoria, and moved with him and the first of their 5 children to Orbost in East Gippsland. Lonely and isolated at first in Orbost, she fell into bad habits, but was inspired to change and improve herself when she joined the Salvation Army. She taught Sunday school and began a long association as a leader in the organisation.

A no nonsense approach to racism

Cath encouraged her own children to play sport; finding that participation in the town's sporting activities helped to overcome racist barriers. Her no nonsense approach to racism continued when the family later moved to Bairnsdale. She became the first Aboriginal person to play squash in Bairnsdale and was determined not to let racist attitudes stop her from enjoying the sport at which she excelled. Cath also won acceptance through her quiet focus on good sporting conduct.

In Bairnsdale Cath accepted a position with Kilmany Family Care as a cottage parent, caring for Aboriginal children in out-of-home care. Over 6 and a half years, she cared for more than 80 children in the home. She continued in this role when the Gippsland and East Gippsland Aboriginal Co-operative (GEGAC) assumed management of the cottage home. Today Cath is a GEGAC Board member.

Work on alcohol and drug dependency

Cath's ability to understand how alcohol could fill the 'emptiness of life' led to her next position as a Drug and Alcohol worker for GEGAC. Over a 15 year period she counselled Koorie women suffering from alcohol dependency, offering classes in sewing and cooking, an empathetic ear and referrals to the Winja Ulupna Women’s Recovery Centre in St Kilda, Melbourne.

In her efforts to help women help themselves, Cath was prepared to drive clients to Winja Ulupna at all hours of the day and night. She also extended her work in drug and alcohol by implementing education programs in local primary and secondary schools designed to prevent alcohol and drug dependency.

Cath has also played an important role in improving justice outcomes for Aboriginal people in her region. She has served as an honorary probation officer and as an Elder in the Koorie Court in Bairnsdale since its inception. She has long been a point of contact for local police and is often called upon by them to help young people, sometimes bringing them back to her home to care for them.

Care for Aboriginal children and youth

For over a decade Cath has been employed by the Baptist Union of Victoria providing pastoral care for Aboriginal children and youth. One of the programs she has implemented in this role is Koori Kids Church, which operates 2 days a week for children aged from 7 to 14. This program includes a project to raise awareness of family violence in the community. The respect Cath has earned for her work in breaking down barriers has been recognised by several awards. In 2006 she received the East Gippsland Shire Australia Day Award for Citizen of the Year. In 2011 she received the Victorian NAIDOC Community Award.

Today Cath continues to tackle the impact that poverty and disadvantage can have on young people. Guided by her Christian faith, she dedicates much of her own time preparing gifts to send to disadvantaged children overseas, while quietly advocating for the rights of those who live in her community.