A musical storyteller in the ancient tradition 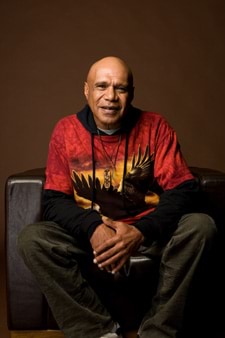 The music of singer-songwriter Archie Roach has given voice to the pain, hope and pride of a generation. His talents have earned him a place among the most treasured musicians this country has produced.

Born in Mooroopna in 1955, Archie's family lived on the Framlingham Aboriginal Mission near Warrnambool. He is one of the Stolen Generations, taken as a child from his mother, Nellie, a Gunditjmara woman, and father, Archie, a Bundjalung man from New South Wales.

Archie passed through several foster homes before being settled with the Cox family, who he acknowledges as having looked after him well. He learned the basics of keyboard and guitar from his foster-sister, Mary Cox. Too young to understand his situation, he was left to assume his biological parents had died.

The truth about his forced removal from his family was discovered when he was a teenager, in a letter from a sister he didn't know he had. It brought news of the recent death of his mother. The revelation triggered an identity crisis that manifested itself in over a decade of alcoholism and periods of homelessness.

While living on the streets Archie met Ruby Hunter, a Ngarrindjeri woman from South Australia. He credits her as his saviour. Ruby was also of the Stolen Generations and a talented musician. The two soul mates embarked on a journey of healing through music. Years later, when they were married with a family of their own, their house would remain open to disadvantaged young people in need of the support they themselves had found in each other.

Archie caught the attention of musician Paul Kelly and his Messengers' band mate, Steve Connolly, in 1989, with his song, Took the Children Away. An act of personal catharsis, its plaintive account of the removal of Aboriginal children from their families resonated across Australia and internationally. Many identified closely with Archie's searing lyrics; many more could not help but be moved by them.

In 1990, Archie released his debut album, Charcoal Lane. Kelly and Connolly were producers. The album took its title from a laneway in Fitzroy — the heartland of Melbourne's Aboriginal community — where Archie had, in more troubled times, idled away the hours drinking.

Charcoal Lane won two ARIA awards, a place among the US Rolling Stone's top albums of 1992, and a Human Rights Achievement Award for Took The Children Away. It was the first time the award had been presented to a songwriter.

Over five additional albums - including Jamu Dreaming and Sensual Being - Archie continued his exploration of the issues affecting Aboriginal people in modern day Australia. This he does without judgement or agenda. As Archie tells it, ""I'm just saying this is what happened, you can take it or leave it.""

His music has earned him international recognition and numerous awards; three ARIA Awards in 1998 for his third album, Looking for Butter Boy; numerous Deadly Awards, including Album of the Year for his 2009 album Music Deli Presents Archie Roach - 1988; and the 2011 Red Ochre Award for his lifetime contribution to Indigenous arts and culture.

In recent years, Archie appeared alongside the late British actor, Pete Postlethwaite and Patrick Dodson in a documentary called Liyarn Ngarn. It follows Archie and Pete as they set out in the footsteps of a young Indigenous man, Louis Johnson, across the troubled landscape of modern Aboriginal Australia.

The high regard in which musicians around the world hold Archie is evident in the diverse mix of artists with whom he has shared a stage and friendship. The list includes Paul Simon, Joan Armatrading, Bob Dylan, Crowded House, Tracy Chapman, Billy Bragg, Suzanne Vega and Patti Smith.

Throughout it all, Ruby remained a constant in Archie's life. They often collaborated, and Ruby received her own acclaim when she became the first Aboriginal woman to sign a major recording deal. They regularly toured together, everywhere from Europe and the US, to the remotest regions of outback Australia. More recently, they were among the founding members of the Black Arm Band, while Ruby's beautiful illustrations featured in a children's lyric book of Archie's iconic song, Took The Children Away.

Archie lost his beloved Ruby in 2010. In her honour, he runs Ruby's Foundation, which looks to improve opportunities for young Indigenous people through art and culture.

While personal experience remains the lifeblood of Archie's music, his gift lies in his ability to connect with people no matter what their background. He is a musical force with stories to share and a message of reconciliation for all who open their hearts and ears. With his powerful voice and immense talent, Archie is nothing short of an Australian music legend.