A passionate worker up to the challenge 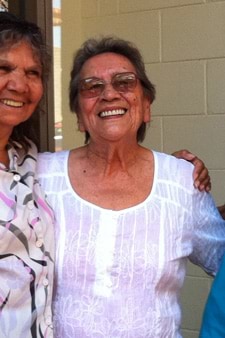 Alma Thorpe has never shied away from hard work. Her persistence and passion has helped build community-run health and social services that bring real benefits to Aboriginal communities in Victoria and around Australia.

Alma is a Gunditjmara woman, born in Melbourne in 1935. The suburb of Fitzroy, where her family lived, was at that time little more than a slum. It was, however, home to a close-knit Aboriginal community — one that would grow to become Victoria's largest.

Alma's mother, Edna, arrived in Fitzroy at age 15. Her departure from the Framlingham Aboriginal Reserve near Warrnambool had been forced upon her by legislation requiring Aboriginal people of mixed descent to assimilate into white society. Alma's father was non-Aboriginal.

Life was tough for the family. Their house was derelict and without electricity. Struggle was constant. Nevertheless, Alma recalled food on the table and playmates in the form of the many cousins who shared her home. She credits her mother's strength at this time with inspiring her later endeavours.

At age 12, she left school and began to work in a shoe factory. At 18, she married and moved with her husband to the town of Yallourn. They had seven children together. Alma later fostered two more.

Alma separated from her husband and returned to Melbourne with her children in the 1960s. While working as a barmaid, she became involved in an Aboriginal-led movement — born around Fitzroy's kitchen tables and in its laneways — that was gaining real momentum. She marched alongside community leaders, like Geraldine Briggs and Margaret Tucker, calling for recognition of her people's rights. Alma was further inspired by her mother, who raised money to give proper burials to those who would otherwise end up in unmarked 'pauper' graves.

With the success of the 1967 referendum, Indigenous Australians were included in the census. Alma was proud to stand up and be counted as an Aboriginal woman for the first time.

In 1973, she helped establish the Victorian Aboriginal Health Service (VAHS) in an old building in Fitzroy's Gertrude Street. Her mother, ever willing to do what was needed, lent her services as the cleaner.

Its creation was significant. After decades of marginalisation and institutional neglect, Aboriginal people were taking charge of their own interests. This spirit of self-determination led to several other Aboriginal-run organisations being established, all underpinned by what Alma called a spirit of 'independence, integrity and land rights'.

Alma poured all her energy into the Health Service. As her fellow founder and mentor, Dr Bruce McGuiness, put it, ""Without Alma Thorpe there wouldn't have been a health service."" The Service aimed to provide quality health and dental care to the Aboriginal community. From one doctor and a committed group of volunteers, it has grown to employ many staff across several sites around Melbourne.

For Alma, the role of the Service was as much social as it was medical. It brought people together and gave them a sense of belonging. It built an awareness of health issues in the community that had not been there before. There was also a welfare component to her work, as Alma would help the men who lived in the suburb's parks apply for benefits.

Alma set up many initiatives through an offshoot of the VAHS known as the Mother Service. These include the Yappera Children's Service, which provides child care, and a youth club and gym opened in 1977. The latter is now known as Melbourne Aboriginal Youth Sport and Recreation (MAYSAR) and Alma's daughter, Glenda, recently took over as CEO.

Right across Australia, Alma helped roll out Indigenous-run health programs as a member of the National Aboriginal and Islander Health Organisation (NAIHO), a peak body established in 1976. She has held positions on various influential committees, including the Victorian Aboriginal Community Controlled Health Organisation (VACCHO), and lobbied government at state and federal level. Her involvement with the VAHS continued — she became chairperson and served on the Funeral Service Committee. She was also a member of the Victorian Aboriginal Legal Service and made a life member of the Aborigines Advancement League. All this she did without pay. Her remuneration was in seeing her people pull together and make change happen.

Today she is Elder in Residence at the Institute of Koorie Education, Deakin University, and continues her involvement with MAYSAR. She has received community awards but treasures being a great grandmother most.

Alma sees herself as a worker — just one among many. Those who have known her think differently. Alma harnessed the energy of a movement and used it to help create something real and meaningful. She did so without compromising her identity and for no other reward than the satisfaction of giving her people a place to belong.