A humble gentleman who loved community and country 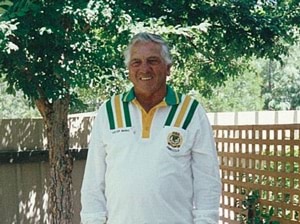 Lester Marks Harradine was a cherished local identity in the Wimmera town of Dimboola, in Western Victoria. Always a humble gentleman, he contributed much to the wider community, whether on the sports field; as a returned serviceman; or as a proud Wotjobaluk Elder eager to teach others about his cultural heritage.

Lester was born in 1920 in Bordertown, South Australia. At eight months of age he was brought to Dimboola to be raised by an aunt. His family has connections with the Ebenezer Mission, near Antwerp, north-west Victoria, where Lester's great grandparents, Pelham Cameron and his wife Blanche lived. The couple were early influences in Lester's life.

Having left school at 13, Lester spent most of the Depression era working in vegetable gardens that lined the Wimmera River at Dimboola. Then came the Second World War. He enlisted in the Australian Imperial Forces (AIF) in 1940.

After completing training with the 19th Machine Gun Regiment in Bendigo, Lester was sent to Darwin. He was there when the Japanese dropped their bombs in 1942. In June 1944, he was transferred to Queensland, then on to fight in Indonesia. He was stationed on the island of Tarakan, off the coast of Borneo, until the end of the war, and discharged in 1946. Years later, Lester would reflect on what it meant to him to be treated as an equal by the other soldiers, free of the prejudices that permeated civilian life. This made the pain of lost mates all the more profound.

War left its indelible mark on Lester. He was a member of the Returned and Services League (RSL) and became actively involved with Legacy after his retirement from the Victorian Railways in 1980. He worked for the widows who lived in and around Dimboola and helped them secure the support they were entitled to after their husbands passed away. Lester himself had married his wife Leila in 1958. They had four children.

Sport was a big part of life in Dimboola. Lester was a local champion and lifelong advocate of grassroots involvement – a passion he inspired in his own children. As a young man he was physically active — it was not uncommon to see him riding his bicycle from Dimboola to the nearby town of Lillimur to visit family. He won trophies competing in fire hose running competitions and became president of the Dimboola Bowling Club.

Where Lester displayed most of his talent was on the football field. He starred for the Dimboola Roos throughout the 1940s, '50s and '60s, including as part of the 1946 and 1959 premiership sides. Although Richmond Football Club expressed an interest in him, Lester's loyalty was to his country. He did however play for the Railways team when his job took him away. In 2010, the Wimmera Football League posthumously awarded him 'Legend' status. Today, the player awarded best and fairest as part of the Wimmera Football League's Indigenous Recognition Round receives the Lester Marks Harradine Medal on behalf of the Dimboola Football Club.

On and off the sports field, Lester recognised the need to foster and champion young talent. One person to benefit from Lester's belief was Tracey Rigney, a gifted academic and athlete, who had lost her own father at a young age. Lester was instrumental in requesting financial support, through Legacy, for the books and equipment Tracey needed to further her studies. She went on to win the Ricci Marks Young Aboriginal Achiever Award in 2003, and is now a writer and filmmaker. Tracey acknowledged how instrumental Lester was in ensuring she had every opportunity for success.

Nothing gave Lester greater pleasure or pride than sharing with others the stories of his ancestors. He often gave talks in schools during his later years, and would take interested parties on tours of the Ebenezer Mission. The Dimboola Historical Society has benefited from his donations. Lester's support in providing information on family connections helped establish the Wurega Aboriginal Corporation and Wurega Elder's Group. His and other Wotjobaluk families continue to promote culture and heritage connections based on his legacy. As a senior Wotjobaluk Elder he played a key advisory role in establishing his family's claim in an historic 2005 Federal court decision to recognise native title rights and interests in the Wimmera.

Lester Harradine loved his town, his traditional country and his community. His actions were guided by a desire to serve all three. As a role model to all he met, he was second to none, proving himself as a respected Aboriginal leader and a great Victorian.