A song man with a message of hope and understanding. 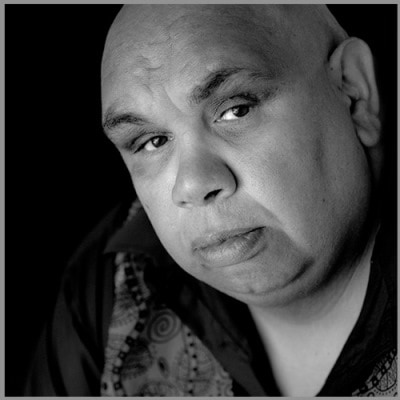 Kutcha Edwards uses music to create connections across cultures, generations, and spaces. With an innate ability to communicate, he uses his talents to nurture understanding and self-knowledge amongst all those with whom he has contact.

Kutcha‘s earliest enduring memory is of being alone, frightened and distressed

A Mutti-Mutti man, Kutcha was born in 1965 near the Murrumbidgee River in Balranald, New South Wales, the ninth youngest of Mary and Nugget Edwards’ 12 children. He is one of the Stolen Generations, removed, along with 5 of his siblings, from his family when he was 18 months old.

Separated from his siblings in a Melbourne institution, Kutcha‘s earliest enduring memory is of being alone, frightened and distressed in a cot in a darkened room. He was later moved to Orana Methodist Children’s Home where he was reunited with his older sisters and brothers. Though only children themselves, Kutcha’s older brothers and sisters did their best to protect and nurture him within the institutional environment. It was only after so many lost years of separation that he was able to return to live with his mother Mary and his 3 younger siblings who were, by then, living in Gippsland.

A responsibility to try to make a difference for others

As an eager young man, Kutcha moved back to Melbourne to train as a community health worker at Koori Kollij in Collingwood. There he made contact with inspirational teachers such as Aboriginal activists Bruce McGuinness, Denis Walker and Gary Foley, who sharpened his awareness of his Indigenous history and heritage. He also found inspiration in Elders such as Aunty Alma Thorpe, a founder of the Victorian Aboriginal Health Service and Jock Austin, who established the Fitzroy Stars Aboriginal Youth Club Gym.

Kutcha has never forgotten how these astute elders looked beyond themselves and tried to improve life for their people. Over the years since, Kutcha has lived by Jock’s philosophy that he has a responsibility to try to make a difference for others.

Kutcha remembers dabbling with writing poetry and lyrics while still at school but it was not until after his time at Koori Kollij that he would go on to perform professionally, singing with Melbourne Koorie band Watbalimba. Through most of the 1990s he was lead singer of the Melbourne-based band Black Fire, which released 2 albums and toured internationally. Following the example of pioneering Aboriginal band, Hard Times, Black Fire gave back to the community when it could, volunteering its services at community fund-raising events.

In 2000 Kutcha went on to become a solo artist.

In 2006 Kutcha became one of the founding members of Black Arm Band, a company of Indigenous and non-Indigenous performers from around Australia which presents contemporary Indigenous performances at major festivals and also tours remote Australian communities.

As a performer, Kutcha believes he has a responsibility to engage with communities beyond his formal performances. He likes to ‘get to know the mob’, rather than simply walk in and out to perform his shows. It is important for him to get to know local communities and to act culturally and adhere to protocols.

Help his audiences understand their own experiences, reconnect with their culture and promote cultural understanding

Kutcha regards himself as a song man, not simply a songwriter. He draws on a profound sense of all those who have gone before him on this land, along with his own life experiences, to help his audiences understand their own experiences, reconnect with their culture and promote cultural understanding. He draws strength from his family, country and his inheritance of a culture that stretches back over thousands of years.

Kutcha’s experience of profound loss as a member of the Stolen Generations, along with the examples set by inspirational elders; have motivated him to ‘give back’ to the community in other ways beyond his music. He has great empathy for those who have been institutionalised and for decades has presented workshops in prisons, juvenile justice centres and schools. Through the experience of song writing and music, he aims to help those who are somewhat lost to find themselves and gain hope for the future.

Kutcha has been recognised with many awards

Since 2002, Kutcha has co-presented Behind the Bars, with community radio station 3CR. Broadcast during NAIDOC week, the program gives a voice to Indigenous men and women in Victorian prisons and correctional facilities. In 2004 the broadcast was awarded a Human Rights Award. In 2003 Kutcha helped to initiate an annual Black Harmony Concert in Melbourne. Held during Cultural Diversity Week, this annual concert brings together artists from Indigenous and refugee backgrounds to celebrate racial harmony and cultural identity.

Kutcha has been recognised with many awards, including a National Indigenous Persons Award and Deadly Award (both in 2001) and a Victorian Indigenous Performing Arts Award in 2004. However, just like his mentor Jock Austin, he does not do what he does for the accolades. Drawing inspiration from all of the Elders that have gone before him, he believes that ‘work is not work if someone is benefiting from what you do.'