For an unwavering commitment to family-based advocacy. 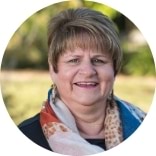 A leader dedicated to improving Aboriginal health and wellbeing

Karen Bryant was born in Melbourne on Boon Wurrung country on 10 October 1965 and is a proud Gunditjmara woman, from her mother’s line. Karen’s mother Yvonne (nee Gallagher) during her younger years lived at Framlingham in southwest Victoria with Karen’s grandmother Frances (nee Winter). Karen’s father was a non-Aboriginal man who served in the Royal Australian Navy’s Peace Operations (peacekeeping unit) for many years.

Karen spent her childhood close to beaches south of Melbourne, and in Melbourne’s north with her mother’s family. She lived with her parents in Frankston until the age of 5, before they separated. For the next 11 years Karen lived with her father and paternal grandmother. At the age of 17 Karen began living with her mother in Reservoir as she was battling cancer, and she cared for her mother and her sister. After leaving school Karen began an Aboriginal traineeship in bookkeeping at the Victorian Aboriginal Health Service (VAHS) in Fitzroy. At 20 years of age Karen became a proud mother - she has 3 daughters, and at 30 she went back to study.

Karen has worked for nearly 4 decades across community services, organisations, committees and boards to improve health and wellbeing outcomes for Aboriginal Victorians.

Karen’s unwavering commitment to family-based advocacy continued at Yappera Children’s Service Cooperative. From the late 1990s she was a Yappera Board member for nine years, including Treasurer and Vice-Chairperson, resigning from the Board only in 2006 when she took up employment there on an early years project, looking at retention of Aboriginal children attending kindergarten and their health, plus event management for Yappera’s 25 years celebration involving a photographic exhibition.

She is also a founding member of Bubup Wilam for Early Learning, Aboriginal Child and Family Centre, and her tireless volunteering includes eight years on the Board there too.

Karen has served for over 15 years on the Board of Djirra (formerly Aboriginal Family Violence Prevention and Legal Service Victoria). At the 2019 Djirra NAIDOC Week event she was formally acknowledged as an inaugural ‘Djirra Keeper’, one of many respected, powerful and influential Aboriginal women who have committed their lives to promoting and advocating in their own way for Aboriginal women and children escaping family violence.

As of 2020, Karen is Senior Aboriginal Hospital Liaison Officer across four campuses within Northern Health. Karen’s role is extensive, influential, and provides a holistic service to community. When patients and families are in need of help, Karen assists them to navigate health systems. Additionally, she supports Aboriginal staff members, students of the hospital and non-Aboriginal family members of Aboriginal families. Karen also designs and facilitates cultural safety training for the entire medical workforce on effective communication and engagement with Aboriginal people. She is a determined advocate and major driving force for Northern Health’s strategic plans for building capacity for cultural safety.

Karen also offers compassionate support to patients and families facing emotionally difficult experiences, such as end-of-life care, family violence or homelessness. She ensures her clients have access to community services to support and maintain their health after leaving hospital.

Karen’s leadership, advocacy and implementation work have ensured that Northern Health campuses are more culturally safe and accountable, particularly through a Reconciliation Action Plan, Aboriginal Employment Strategy and cultural safety training. She successfully advocated for expanding the Aboriginal Support Unit - Narrun Wilip-giin (‘Spirit Keepers’ in Woiwurrung), increasing the Aboriginal liaison access and support service, as well as culturally safe and appropriate maternity services through establishing the Koori Maternity Service. She has overseen the commissioning of Aboriginal artworks and the establishment of Northern Hospital’s Smoking Ceremony Garden – ‘Jornung Bik’ (‘a pleasant place’ in Woiwurrung) and its annual NAIDOC Week events.

In 2018 Karen received the 2018 ‘Westfield Plenty Valley Local Heroes’ award which celebrates individuals who promote social wellbeing and harmony in the community, voted for by the Aboriginal community, Northern Health and the Plenty Valley community. Karen committed the funds from this award to hospital improvements, including Acknowledgement plaques across all four hospital campuses, resources for patients experiencing inequality, marketing material and the development of Aboriginal specific resources.

Karen is recognised and respected for her leadership and achievements working in two worlds across Aboriginal community controlled and mainstream services to create, protect and promote high quality, culturally safe and appropriate services for Aboriginal community members. Her leadership in local community is founded upon her passionate commitment to equity and justice, and extends to all facets of her life, seen in her sharing of her wisdom and devotion with others.

Karen’s legacy will be in the lasting relationships she has formed with individuals and organisations to achieve commitment to cultural safety as a human right and by addressing inequality. She wants everyone engaged and committed to their journey of cultural safety, respect, value, reconciliation and self-determination. She inspires and guides others to share knowledge, set goals and work to achieve them.

Her legacy is not just what she has achieved, it is how she has achieved her goals and acknowledging the wisdom she has gained from strong matriarchs in her family – by being strong in identity, thriving in culture and her ongoing commitment to living a life free from violence and disadvantage. She continues to keep striving for equity for Aboriginal and Torres Strait Islander people and implores everyone to keep striving too.