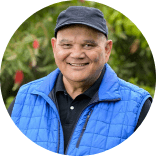 Jim was born in 1944 in Cairns, Far North Queensland to Torres Strait Islander parents. His mother Marcellina Pearl Remedio has kinship connections to Murray Island in the Torres Strait. Growing up in Cairns, Jim attended St Joseph’s Primary School and Cairns State High School. Jim left high school at the age of 14 in 1957 to begin a five-year apprenticeship as a Fitter and Turner and completed night school as part of this apprenticeship. Once qualified, he undertook a wide range of jobs across Northern Australia and quickly gained a reputation as a highly skilled and hardworking tradesman. At the age of 21 he started his first company, taking on a range of jobs in the construction industry. After moving to Victoria, Jim worked in construction roles in the power generation, oil, gas, aluminium and ship-repair industries before purchasing a farm and becoming a successful primary producer for over twenty years.

In addition, Jim was working at the same time in Bendigo as a Cultural Officer for the Dja Dja Wurrung Association and later became its Manager. His work as a Cultural Officer assisted with the return of Aboriginal remains back to Country. At that time, Jim’s daughter Teresa Remedio was a producer at the ABC and helped the local group setup the license and help with programming. This was instrumental in establishing the South Eastern Indigenous Media Association. Jim became a broadcaster on the then 3CCC Colours Aboriginal Music show in Bendigo. Jim was a founding member of the National Indigenous Media Association of Australia, the original Board of the National Indigenous Television network (NITV), and he has become a Community Broadcasting Foundation Grants Committee member for over twelve years.

Jim has held a wide range of roles in the struggle for Aboriginal and Torres Strait Islander rights and development. He was engaged by the Victorian Trades Hall Council to work on the Commonwealth’s Working Nation Employment and Training Strategy. Jim served on the Museum of Victoria’s Indigenous Advisory Committee, became an Inspector under the Aboriginal and Torres Strait Islander Protection Act Part 2. He also was closely involved in setting up Aboriginal Community Justice Panels in Victoria.

As an experienced consultant, Jim was approached by the University of New South Wales’ Faculty of Law, as a Trainer for their Diplomacy Training Program and the Fred Hollows Foundation’s Indigenous Peoples, Human Rights and

Advocacy Training program for advocates. He was also engaged by Vision Stream and Telstra to provide land access agreements for rollout of broadband networks across Australia, which required extensive negotiation with Traditional Owner groups. In addition, he was Vice President Oceania for the World Association of Community Radio Broadcasters (AMARC) a United Nations sponsored international community radio group that provided training for Indigenous Radio broadcasters in Malaysia, Thailand and the Philippines.

In the 2000s, Jim moved into management of Indigenous Radio Stations, beginning with two years at Radio Larrakia in Darwin, followed by two at Yamatji Media in Carnarvon (Western Australia). Recruited because of his strong management reputation, Jim then moved to Central Australian Aboriginal Media Association (CAAMA) Radio Alice Springs where, over seven years, he oversaw the growth of the station’s investment in technology and training to lift capacity and productivity, making CAAMA one of the premier radio stations in Australia.

In 2000, Jim was awarded the Centenary Medal for Services to the Community. In 2015, he took on the management of Melbourne Indigenous station Kool N Deadly (3KND), Melbourne’s first Indigenous owned and managed AM radio station. Jim brings a wealth of industry and governance experience with him. He has worked to develop a regional network to increase its sustainability, capacity and impact to reach a Victorian-wide audience and continues to support many other radio stations, including Queensland Remote Aboriginal Media (QRAM).

Jim is a strong and proud warrior who has dedicated his life to supporting and advancing rights for Aboriginal and Torres Strait Islander communities across Australia. He continues to use his platform to highlight Aboriginal and Torres Strait Islander voices, culture, knowledge and rights. He remains an important voice and extraordinary leader for his community. He has shown continued support in the ongoing evolution of 3KND and First Australians Media Enterprises, ensuring it remains Aboriginal owned and run.