A woman who encouraged all to live life to the fullest. 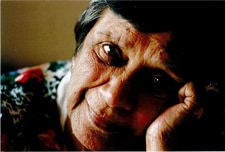 A woman who encouraged all to live life to the fullest

Aunty Iris Lovett-Gardiner led an inspiring life, from young Mission girl to university graduate at 70 years of age. Cherished by all who knew her, Iris' proudest achievement was to deliver improved support services to Aboriginal Elders.

The Gunditjmara woman was born in 1926 at the Lake Condah Mission in south west Victoria. The daughter of Herbert and Emma Lovett, she was one of six children, and grew up surrounded by a large extended family. She attended school at Lake Condah and Macarthur, but left at the age of 14 years, as was common for the day.

The Lake Condah Mission had officially closed in 1919. However, some families remained on what was - in the case of Iris' father - ancestral land. Work and the war took her father away for long periods, but Iris still enjoyed a carefree childhood of horse riding and mischief making. Diminutive in stature, but with ample personality, she is fondly remembered as being heard long before she was seen.

The family moved to Greenvale when Iris was nine years old. Iris was a great support to her mother during her father's absences. She became a domestic worker after leaving school and was employed by a family in Hamilton, before moving to Melbourne after a year.

Living in Middle Brighton, Iris was housekeeper to the family of a university professor. Later, she got a job in the vegetable room at the Royal Melbourne Hospital. Most Aboriginal families lived in Fitzroy and Iris regularly visited relatives there. She also attended the Gore Street Church of Pastor Doug Nicholls. After Melbourne, Iris lived for a time in Mooroopna, where she worked at the local hospital and socialised with people from the Cummeragunja Mission.

Iris was first married at 17 years of age, and toured the country, following the agricultural show circuit, for seven years. While her husband boxed, Iris staffed various sideshows and even pretended to be a hypnotist for a time. She enjoyed the camaraderie that existed between the eccentric show workers, who included performers from as far afield as China and Africa. Her first marriage ended, and Iris went on to marry Edward 'Teddy' Gardiner. The couple settled in the Melbourne suburb of Collingwood, where they spent many happy years together. Teddy worked hard to ensure Iris could dedicate her time to the community.

For a period of time, Iris worked at Aboriginal Enterprises, a pioneering venture in Belgrave run by the prominent Aboriginal activist Bill Onus. Busloads of tourists would visit Bill's shop and factory to buy the boomerangs and other traditional artefacts he manufactured. Iris was a salesperson and also promoted the business interstate.

After several years as a community worker in and around Fitzroy - during which time she worked alongside several capable Aboriginal women to set up much needed community services - Aunty Iris was involved with the establishment of the Koorie Kollij in 1983. Located in Collingwood and run by the Victorian Aboriginal Health Service, it was designed to train Aboriginal Health Workers and offered a range of Aboriginal-focused courses.

Aunty Iris taught the history program. It provided her with an opportunity to properly research her heritage, as well as that of her students. With Aunty Iris' guidance, they wrote five books and four pamphlets on Victoria's Aboriginal missions together.

In 1987, Aunty Iris founded Aboriginal Community Elders Services (ACES). She was motivated to do so after hearing news that a friend had passed away alone in a nursing home, without anyone in the Aboriginal community knowing about it. Aunty Iris insisted there was a need for a safe place where her people's Elders could be watched over. She lobbied hard to secure land and funding for a purpose-built facility in East Brunswick. The Iris Lovett Gardiner Aboriginal Elders Caring Place opened in 1991. Today, ACES operates the 25-bed nursing home and hostel, and provides a range of other valuable services.

Having harboured a lifelong thirst for learning, Aunty Iris enrolled at the Institute of Koorie Education, Deakin University, in 1995. She graduated a year later, at the age of 70 years, with a Graduate Certificate in Natural and Cultural Heritage Interpretation and went on to complete a Masters in Applied Science. It was an inspirational achievement and source of great pride to her family.

Aunty Iris was a champion of reconciliation, but believed the key to future progress lay in proper acknowledgement of and education about the past. Although she fought for land rights at Lake Condah, she sadly did not live to see the eventual recognition of native title for the Gunditjmara people in 2007 and again in 2011.

A documentary of Aunty Iris' life was made in 1997. In 2001, she was inducted to the Victorian Honour Roll of Women, and was made a Member of the Order of Australia in 2003. Her work has been acknowledged by several humanitarian organisations, including Amnesty International. Aunty Iris lived out her last years in her mother's home town of Hamilton. She passed away in 2004 and is buried beside her husband there.

Aunty Iris' memory is treasured by her large family and friends, and she remains an inspiring role model for Aboriginal and non-Aboriginal people. Her continued pursuit of knowledge meant she lived life to the fullest and encouraged all those around her to do the same.