Committed to the advancement of aboriginal affairs, land rights, welfare and health 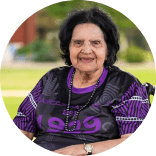 Aunty Frances Mathyssen-Briggs is the descendant of the Dhulanyagen Ulupna Clan of the Yorta Yorta. She has a lifelong commitment to family, welfare, health, land rights and culture. She has significantly enhanced the lives of Aboriginal Victorians through her support. Her community development work and dedication spans over 70 years of community service and activism.

Frances was born in 1929, on Cummeragunja Reserve (New South Wales), to Geraldine Briggs (nee Clements) and Selwyn Briggs. She is the oldest of their nine children. Frances was nine years old when she and her parents participated in the historic residents walk-off from Cummeragunja Misison, New South Wales over the border to Victoria.

After some time, the Briggs family relocated to Mooroopna. They lived in an area of flat lands close to the Goulburn River known to the locals as “The Flats”. Each time it rained heavily, the river flooded into the community camps/homes: “They were hard times, but good times, because we had each other”.

Frances has been actively involved in building community partnerships. She has marched for women’s equality, land rights and Aboriginal rights alongside her children and family. As a mother with a growing family she was acutely aware of a growing disconnect between the services provided by government and what was needed within her community. She advocated for the need for better access to services for her community.

Frances was instrumental in the establishment of the first statewide Aboriginal Welfare Committee. Frances was also a co-founder of the Rumbalara Aboriginal Co-operative and Medical Service, which began from her house using her kitchen and home phone.

Frances assisted in paving the way for change in her community by educating local organisations who provide healthcare and family support to Aboriginal patients and families. This initiative highlighted the importance of working collaboratively with organisations to deliver a holistic service that meets the needs of the Aboriginal community. The Aboriginal Welfare Committee also lobbied the State Government for the return of the Rumbalara housing settlement (Mooroopna) for community use. After four years they were successful in advocating the government to return the land. Five decades on, this has been a lasting legacy of Frances and committee members of their early activism and commitment to their community.

Throughout the 70s, 80s and 90s Frances has been instrumental in increasing engagement and cultural awareness, by working collaboratively with the Goulburn Valley Hospital. This work has resulted in the creation of a local agreement between the hospital and the Rumbalara Aboriginal Co-operative. This agreement has been recognised by local Aboriginal community-controlled health organisations as a culturally appropriate holistic service, because of its emphasis on family and community.

Frances reached 90 years of age in August 2019. She is the mother of ten children, grandmother of 39, great-grandmother to 38, and great-great-grandmother of five. Frances married her husband Bill Mathyssen in 1980 and since then they have fostered over 100 Aboriginal children and celebrated their official 40th wedding anniversary. Frances is now semi-retired, however she currently sits on the local Rumbalara Elders Committee and continues to mentor and reconnect young people to their family history. Frances is an Elder on the Yorta Yorta Nations Incorporation Committee and is frequently called upon to provide cultural advice. Frances inspires her children, grandchildren and great grandchildren with her passion to support and strengthen the community through culture over many decades. She is loved and respected by her family and the community.

(Healesville), Regional Councillor of the former Aboriginal and Torres Strait Islander Commission, Chairperson of the Goulburn Valley Aboriginal Elders Committee, and Chair and Deputy Chair of Koorie Women Mean Business. Frances has also been involved in the Committees that co-founded the Victorian Aboriginal Health Service, Victorian Aboriginal Child Care Agency, and the National Council of Aboriginal and Torres Strait Islander Women. In recognition of this great body of work, Frances was inducted onto the Victorian Women’s Honour Roll in 2001.

Frances is a remarkable Elder. Her work has turned challenges into opportunities for positive

and long-lasting change for her community. Frances has made a difference to her community through her advocacy and support, influencing the lives of numerous Aboriginal Victorians. Frances inspires people to participate, ask questions and challenge everything in order to make change. She has been actively involved in building community relationships and she has advocated for equality. She continues to advocate for land rights and human rights and has been instrumental in changing the way that state and not-for-profit organisations work with Aboriginal communities when providing healthcare and family support. Her lasting legacy has been the development of holistic models of healthcare and support centred on the needs of the Aboriginal community.