A force for change in her community. 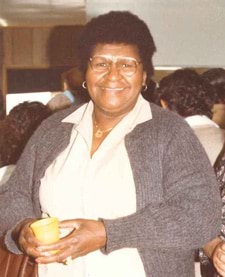 Aunty Eleanor Harding was a respected community figure who poured her energy into achieving a better deal for Aboriginal and Torres Strait Islander peoples. She was especially passionate about women's issues and education.

Eleanor's father was killed while working on a pearl lugger when she was eight years old. Not long after she lost her mother she moved from the islands to the mainland to live with her grandmother. They lived in several Aboriginal communities around Cape York, including Old Mapoon and Mona Mona, before settling at the Bloomfield River Mission — known today as Wujal Wujal.

At the time, Aboriginal and Torres Strait Islander peoples of Queensland were subjected to some of the most severe laws in Australia, with nearly all aspects of their lives controlled by state authorities. In 1956, Eleanor moved to Melbourne in the hope that she might give her children a better life.

After a brief stay in South Yarra, she settled in Fitzroy, where Aboriginal families occupied many of the suburb's boarding houses and flats. Life was not without its struggles. However, Eleanor quickly ingratiated herself with the poor but close-knit community.

What the residents of Fitzroy lacked in material wealth they more than made up for in goodwill. Neighbours were known to share food and watch each other's children. When Eleanor purchased the first toaster in her building, it quickly became a communal appliance used by all the tenants. Locals socialised at fortnightly dances held at Collingwood Town Hall, where Eleanor performed with a group known as the Fitzroy Dancing Girls.

Motivated by the hardship she saw around her, Eleanor worked alongside other dedicated individuals to help fulfil some of the basic needs of the Aboriginal community. She opened her heart to the most neglected, regularly visiting Aboriginal men and women incarcerated in Melbourne's prisons. She would bring them supplies like coffee and biscuits, paid for out of her own pocket, as well as a sympathetic ear.

During the 1960s, Eleanor was involved in a national campaign to secure equal rights for Indigenous Australians, as a member of the Aborigines Advancement League and the Victorian branch of the Federal Council for the Advancement of Aborigines and Torres Strait Islanders (FCAATSI). She was part of the latter's push for constitutional change, which resulted in the 1967 Referendum. Eleanor sold badges and distributed pamphlets to educate the public on what the vote's success would mean. It proved a symbolic win in the long fought battle for Indigenous rights.

Eleanor was an executive member of the National Aboriginal and Islander Women's Council. During Bicentennial celebrations in 1970, to mark the landing of Captain Cook at Botany Bay, the Council organised for busloads of women to travel to Sydney and participate in a peaceful protest to highlight what the historic moment meant for Indigenous Australians. In 1972, they travelled to Canberra in support of the Aboriginal Tent Embassy.

Like many Indigenous women of her generation, Eleanor made her home available to those in need and would regularly provide short-term care to children who would otherwise be institutionalised. When Aboriginal people came to Fitzroy in search of missing relatives, she would assist them in finding their loved ones.

Despite having left school at a young age, Eleanor recognised the value of education. She was a supporter of Abschol, a program set up in the 1960s to raise money for scholarships for Aboriginal students, which later evolved into the federal Abstudy scheme. All Eleanor's children went on to complete higher education with her encouragement and support. Many of them are high profile figures in the arts and Aboriginal affairs today.

Aunty Eleanor is remembered with great affection as an integral part of the Indigenous rights movement in Victoria. Her message was a simple but potent one: respect each other and be proud of who you are.