Advocate for the rights of aboriginal Victorians. 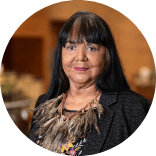 Aunty Zeta Thomson is a respected Elder and descendant of the Yarra Yarra Clan of the Wurundjeri people through her father and grandfather, Alexander Briggs, and is a descendant of the Ulupna Clan of the Yorta Yorta people on her mother and grandmother, Teresa (Yarmuk) Clements’ side. She is a renowned artist, culture teacher and advocate for the rights of Aboriginal prisoners in Victoria.

Aunty Zeta was born in 1946 to Geraldine Briggs and Selwyn Briggs. She is one of 13 children and grew up with her large family in Shepparton, Victoria. Aunty Zeta retains strong connections to her ancestral homelands.

Her parents participated in the historic Cummeragunja Walk-Off, relocating to the Shepparton-Mooroopna. Her family maintains links with Cummeragunja through the continuing use of ancestral burial grounds. Her knowledge of culture has been passed down by her mother and father and maternal grandmother. Aunty Zeta and her husband, Edward have been proudly for married 54 years. She is a mother of three children and a grandmother of ten.

She has had a lifetime involvement in Aboriginal affairs, working at a community level, like many of her family members. She has supported land rights and Aboriginal rights with her family:

“I come from a strong warrior family and my family has contributed to the Aboriginal community over many years… My family was very involved in the community and they took us everywhere as children with them. When they went to small community gatherings to speak about our people’s plight and what was happening with our people, we were was always there with them so we could listen”.

Aunty Zeta was the first Victorian Aboriginal artist to have work exhibited at Melbourne Museum’s Bunjilaka Gallery. Her paintings are inspired by the family stories and her work showcases the Yorta Yorta creation story: “Aboriginal art is storytelling; it is inspired by old creation stories”.

Aunty Zeta was a cultural advisor on the internationally renowned movie, The Sapphires. She has also recorded traditional stories for Swinburne University of Technology that feature her artwork on the CD cover. Over the years, Aunty Zeta has also been involved in various projects and committees within the Aboriginal community. She volunteers with the Independent Prison Visitor (IPV) Scheme to conduct assessments and report back any issues to the Victorian Minister for Corrections. Aunty Zeta has been involved with the IPV Scheme as a volunteer since 2006, when it was formerly known as the Official Prison Visitor. She has given up her time to visit prisons on a monthly basis. As an IPV volunteer she has gone above and beyond to improve the experience for Aboriginal people within a prison setting.

Aunty Zeta has also been involved in healing programs through the Western Suburbs Indigenous Gathering Place for Aboriginal and Torres Strait Islander people who have had involvement with the justice system. Aunty Zeta oversaw the women’s family circle program with the aim of connecting community members to their Aboriginality and spirituality. Through this program, women shared their life story and participated in cultural actives, including painting, dance, craft, and creating strong community connections: “We believe in our culture and the spirit world; a lot of Aboriginal people have not always been connected to their culture and their heritage. Our people are empowered by culture and this makes us strong in our lives.” Aunty Zeta noted, “for Aboriginal people there is no distinction between culture and spirituality.” The Healing Program at this Gathering Place was guided by the principles of holistic healing, addressing spiritual, physical and mental health in the wider context of social and emotional wellbeing. It provides support to the whole-of-family during transition from prison to community.

Aunty Zeta’s support for Aboriginal youth in influencing the Victorian Aboriginal Justice Agreement, Burra Lotjpa Dunguludja, is testament to her ongoing support to her community. Aunty Zeta has been a tireless campaigner and advocate for her community whose strength, resilience and passion for Aboriginal rights to be upheld within the criminal justice system has been exemplary.