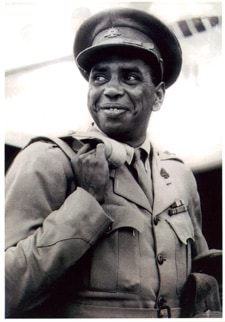 Reginald 'Reg' Saunders was the first Aboriginal person to be commissioned as an officer in the Australian Army; a significant accomplishment at a time when Aboriginal people were often discriminated against.

The Gunditjmara man was born in 1920 on the Framlingham Reserve in western Victoria. His family had a history of military service and his father was a veteran of the First World War. Reg lost his mother at an early age and spent much of his childhood living with his maternal grandparents and younger brother, Harry, at Lake Condah, while his father travelled in search of labouring jobs. A bright student, he attended school until he was 14 years old.

As a teenager, Reg was unafraid to stand up against injustice. When his wages were withheld by an employer - a situation that regularly befell Aboriginal workers - he refused to continue the job until paid his full entitlement. From 1937, Reg ran a sawmill with his father and brother, until the operation was destroyed in a bushfire.

In 1940, Reg enlisted to fight in the Second World War. Although a policy intended to preclude Aboriginal people from service was later implemented, Reg experienced nothing but camaraderie from his fellow soldiers. He showed leadership potential during training in northern Queensland and was promoted to lance corporal, and then temporary sergeant, in quick succession.

Reg was sent with a group of reinforcements for the 2/7th Battalion in North Africa. A campaign in Libya was followed by one in Greece. Forced into retreat during the latter, Reg and his unit were put ashore on the island of Crete after their ship was destroyed. When Crete was invaded in May 1941, the 2/7th Battalion participated in what became known as the Battle of 42nd Street. The allied troops were evacuated, but the rear guard - made up of the remaining soldiers of the 2/7th, including Reg - did not make it to the evacuation point in time.

Many of the men surrendered to the Germans and were made prisoners of war. However, a number of Australian and New Zealand soldiers evaded capture. Reg was hidden by a local family for almost 12 months, in the hillside village of Lambini. He finally escaped on a British submarine and returned to Australia in 1942. The contribution of Reg and his fellow ANZACS to the defence of Crete is still honoured by Cretans today.

Reg was sent to New Guinea, where he served as a temporary sergeant. He acquitted himself impressively in battle and assumed command of a platoon when its commander was wounded in action. As a result, he was recommended for promotion to a commissioned rank. Sadly, his brother Harry was killed while also serving in New Guinea.

Upon his return from New Guinea, Reg completed officer training and was promoted to lieutenant in 1944. As the first Aboriginal Australian to reach such a level of command, his story attracted significant press coverage. Reg was returned to New Guinea, where he commanded a unit. Most of the men who served under him had rights of Australian citizenship that he was denied. He was later wounded by gunfire, but made a full recovery.

Reg married his first wife, Dorothy Banfield, in 1944 and was discharged from the army in 1945. The couple relocated to Melbourne with their three young daughters. Reg worked intermittently as a tram conductor, foundry worker and shipping clerk.

In 1950, Reg rejoined the army as a lieutenant to fight in the Korean War, and was quickly promoted to captain. He became the officer in charge of C Company of the 3rd Battalion and participated in the famous Battle of Kapyong. His battalion was awarded a US Presidential Unit Citation but Reg declined a personal decoration.

Reg requested discharge from the army in 1954, after a period spent training servicemen. He worked in the logging industry in Gippsland for a time, before moving to Sydney where he was employed by a bronze manufacturer for 11 years. He also remarried - an Irish nurse named Pat Montgomery.

Recognised as a valuable role model for Indigenous Australians, Reg was recruited to the Office of Aboriginal Affairs in 1969 and made one of their first liaison officers. The role required him to engage with Aboriginal and Torres Strait Islander communities around Australia. Reg continued to work at what was to become the Department of Aboriginal Affairs in Canberra until his retirement in 1980. He was an active member of the Returned and Services League (RSL).

Although both his marriages ended, Reg was father to 10 children. In keeping with family tradition, his son joined the Army, while four of his daughters married soldiers. Reg was recognised for his community work in 1971 when he was made a Member of the British Empire in the Civil Division. He later served on the Council of the Australian War Memorial.

After Reg passed away in 1990, his ashes were scattered at Lake Condah. Today, two streets in Canberra bear his name and he has been commemorated with a room in the Canberra Services Club. Each year, the RSL awards the Captain Reg Saunders Scholarship to an Indigenous student. His medals are displayed at the Australian War Memorial.

Reg displayed courage and leadership during Australia's wartime years, earning him the respect of those he served with, and the gratitude of all he defended. Importantly, he offered proof to future generations of Indigenous Australians that the seemingly impossible could be achieved.