A sporting hero with passion for his community. 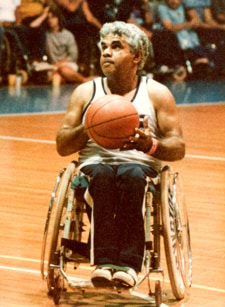 Uncle Kevin Coombs is a popular Wotjobaluk Elder, who was a champion wheelchair basketball player and Australia's first Indigenous Paralympian. Equally significant has been his work in Aboriginal health, which has benefited communities around Victoria.

Born in Swan Hill in 1941, Kevin is the son of Cecil Coombs and Rosie Clayton. After losing his mother at age five, he and his four siblings lived with relatives in Balranald, New South Wales. Kevin attended primary school there, and helped out at his uncle's timber yard. He was happiest when playing in the bush.

At the age of 12 years, Kevin was left with paraplegia after being accidentally shot in the back while out hunting with his cousins. At the time, there was no specialised care for people with spinal injuries. Kevin developed bedsores while in a Swan Hill hospital and had to spend 12 months lying on his stomach to recover.

The Austin Hospital in Melbourne became his home for the next 10 years, largely because there was nowhere else for him to go. When a Spinal Injuries Unit was established in 1957, Kevin was one of the first patients. Although distance and travel costs made family visits difficult, a Balranald businessman raised the money to purchase Kevin his first wheelchair.

Kevin was introduced to basketball as part of the hospital's rehabilitation program, which included a strict exercise regime pioneered in the UK after the war. Kevin showed great potential from the outset and was soon participating in a fledgling national competition.

An impressive performance at the inaugural Australian championships in 1960 saw Kevin selected for the first Paralympic Games in Rome the same year. He was the only Aboriginal person representing Australia and enjoyed the camaraderie of his team mates.

When Kevin left hospital in 1964, he put competitive sport on hold to focus on setting up life outside the ward. This was no easy undertaking for a young, wheelchair-bound Aboriginal man, as a period spent in a hostel run by the Crippled Children's Society attests. However Kevin's resilience prevailed. Jobs at a glass manufacturer and then in telephone sales followed, as did his first specially equipped car. Kevin met and married his wife Linda in 1969. They have two daughters.

Kevin returned to basketball in time for the 1968 Paralympics in Tel Aviv, and put in consistently exceptional performances in the national championships. Inevitably, Kevin became an important advocate for disabled sport through his ongoing involvement with Wheelchair Sports Victoria - now Disability Sport and Recreation - which evolved from the Paravics sports club that Kevin helped found in the 1960s. The organisation renamed their Fitzroy headquarters 'Kevin Coombs House'.

After captaining the basketball team at the 1972 Paralympics in Germany, Kevin was made captain of the Australian teams for the 1974 Commonwealth Games, 1977 Silver Jubilee Games and the 1980 Paralympics in Holland. He helped secure gold medals for Australia at the Far Eastern South Pacific Games in 1977 and 1982, while on home soil he was part of a winning Victorian team and was twice named Best and Fairest. Although Kevin retired from international competition after his fifth Paralympics in 1984, he continued to play and coach domestically until 1997.

Kevin left his sales job in 1979 and, following a 12-month traineeship, was chosen as the Aboriginal representative on the National Committee for the International Year of Disabled Persons (IYDP). The leadership Kevin displayed in sport was replicated in his engagement with Indigenous communities around the country. As a result, he successfully applied for the job of establishing and managing Victoria's Koori Health Unit.

The Koori Health Unit used federal funding to set up local Aboriginal medical services around Victoria. During Kevin's 10-year stewardship, the Unit successfully placed hospital liaison officers in key hospitals and developed the Koori Alcohol and Drug Program. Both were achieved, despite initial opposition, with the help of Kevin's cool-headed diplomacy. He went on to coordinate the statewide drug and alcohol program. He also served on the board of Aboriginal Hostels Ltd for 19 years - just one of the many committees to benefit from his involvement.

Among his many awards and honours, Kevin has received the Medal of the Order of Australia medal, an Australian Sports Medal, induction to the Basketball Australia Hall of Fame, a Deadly lifetime achievement award and a NAIDOC award. His place in Australian sporting history was recognised with official roles in the Sydney Olympics and the Paralympics - he is one of few Australia athletes to have carried both torches and was one of only nine to have an avenue in the Sydney Olympic Village named after him.

As a highly respected Elder, Kevin addressed a special sitting of the Victorian Parliament in 2000 and is an ambassador for the National Indigenous Strategy for Literacy and Numeracy. Today, he remains as active in the community as ever. Among his commitments, he is patron of the Onemda Koori Health Unit at Melbourne University and sits as an Elder on the Broadmeadows Koori Court and Children's Koori Court.

Kevin overcame personal adversity to become a sporting hero with the passion to make a difference. He has inspired on and off the court, proving himself a role model who will endure for generations to come.