A strong leader and activist for Aboriginal people in the media and entertainment sector. 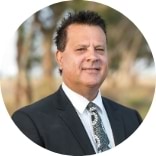 A passionate, courageous, and determined man

Grant Hansen is a proud Kulin Nation man; Taungurung from his mother's people. He was born in Melbourne on 26 March 1965 and grew up in Melbourne’s western suburbs as an avid Footscray Football Club (Bulldogs) supporter with the dream of one day playing for his beloved Doggies.

Grant’s parents were both one-eyed Bulldogs supporters. His father George worked in pubs and had the gift of the gab. His mother Ruth taught her son that you make your own luck. Grant’s parents split amicably when he was 12, and when his mother remarried the ceremony was held on the Whitten Oval, the Bulldogs' home ground.

Grant’s upbringing saw him develop into a passionate, courageous, and determined man; attributes he combines with deep respect for his Elders and their teachings. He applies these attributes to all his endeavours and achievements for Community.

As a teenager Grant excelled at sport. An impressive junior Australian Rules footballer at St Albans, Grant spent a couple of years with the Footscray under 19s team and then did pre-season training with Essendon. Aged 28, he was Captain-Coach of Kealba Green Gully Cricket Club.

Grant was recruited into the Sunshine and St Albans office, then later moved to the Aboriginal Services Unit, Fitzroy. In his time at this workplace, Grant worked with Elders Kevin Atkinson, George Nelson, Daphne Milward and Gwen Brooke who wonderfully taught and mentored him. They spoke to him, a teenager from St Albans, about the stories and struggles and gave him many insights. For 6 years Grant worked closely with Gwen Brooke who became a great friend. As 2 Aboriginal Liaison Officers they developed and provided services so renowned that community members came from across Victoria to seek assistance from them. Grant worked for DSS for a total of 12 years.

Grant’s other strong mentors who became friends include Mick Edwards who supported him coming into the Fitzroy community, Kelvin Onus who mentored him on the importance of self-determination and community control, and also the very respected Elder, Jock Austin.

Grant co-founded and is creative writer, executive producer and host of the twice Logie Awards nominated Marngrook Footy Show, that has run for 12 years. Marngrook, a Gunditjmara word for football and named after the Indigenous Australian game, was broadcast on National Indigenous Television (NITV), as well as Channel 31, Foxtel, the Australian Broadcasting Corporation (ABC) and the Special Broadcasting Service (SBS). Filmed live, the weekly show was NITV’s top rating program with an audience spanning from Tasmania to the Tiwi Islands and across to Western Australia via the Red Centre. Marngrook won Best Sports Show on Community Television, at the 2008 Antenna Awards. Grant believes that Marngrook’s greatest achievement has been to give the Aboriginal football community a voice.

By his 30s Grant was a vocalist, songwriter and guitarist with the band Blackfire, of which he was a founding member. Blackfire toured with Yothu Yindi across Australia and China. Grant was adopted into the Yolngu clan by Dr Yunupingu, who became another great friend and mentor. One of Australia’s most successful Indigenous acts in the nineties, Blackfire was awarded NAIDOC’s 1998 Artists of the Year and the South Pacific Music Award 1998 for the song, My Island Paradise. Grant was Blackfire’s manager for ten years.

Grant also formed Koori Music Club which became Songlines Aboriginal Music Corporation, the first of its type in Victoria. Songlines has seen many aspiring songwriters, musicians and technicians begin their industry journey, and many achieve legendary status. Grant was Songlines’ Chief Executive Officer for 12 years and is a Life Member. In 2003 Grant created the Indigenous concert Share the Spirit, through Songlines. The concert is held annually in Melbourne on 26 January.

Grant has been Chair of Taungurung Lands & Waters Council for four years. In 2020 he was appointed a Director on the Board of Reclink Australia, which provides sport and art programs to disadvantaged Australians. Grant is the first Indigenous person to join the Board. He is on the National Dreamtime Awards Selection Committee, an annual celebration of Aboriginal and Torres Strait Islander achievement in sport, arts, academic and community.

Grant is devoted to family and friends; and is a man with a strong voice for community. Elder John Austin, who has known Grant for more than 30 years, describes Grant as a respectful, dedicated man who exemplifies leadership, stands up for issues and is instrumental in building bridges.

Grant knows his Ancestors are always with him. His legacy is unfolding as he continues to create new pathways that empower Aboriginal people to determine their own future.